Flights between Russia and Egypt on regular, Charter and transit flights had been suspended from 6 November 2015 to determine the causes of the crash of the airliner A321 at Sinai. resident of Russia Vladimir Putin on 8 November signed an official decree for a temporary ban on flights. 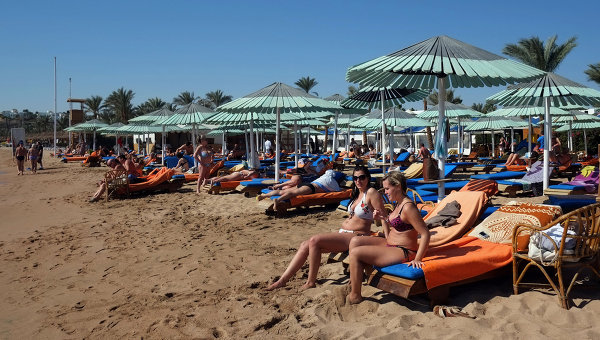 CAIRO, 8 Nov. Margarita Kislova. Tour guides and hotel owners, shops and restaurants in the resort Sharm El-Sheikh in Egypt, where from October 31, flew the last flight of the A321 aircraft with Russian tourists, confident that no guests from Russia and the UK, the city will just “die”.

The Airbus-321 Russian airlines “Kogalymavia” which carried out flight Sharm El-Sheikh to St. Petersburg, crashed in Egypt on October 31 after 23 minutes after takeoff. On Board were 224 people, they all died.

Earlier Russian President Vladimir Putin agreed with the proposal to suspend flights to Egypt to ascertain the causes of the crash of the Russian airliner. The President also instructed to provide assistance to Russian citizens in return from Egypt. On Sunday, Putin signed a decree on the temporary ban Russian airlines to carry out from November 8 to air transport in Egypt. Flights from Egypt to clarify the circumstances of the catastrophe have also suspended many countries.

“We are in shock. I know now in my hotel on vacation the last tourists, and for a long time now and I don’t see the hotel in full”, — quotes the website of the satellite TV channel “al-Jazeera” the words of the owner of a five star hotel in Sharm El-Sheikh Muhammad Mansur. According to him, in a wrecked Russian plane were nine guests from his hotel. “Remember the woman and her two children, they’ve stayed with us, and then died in that plane,” said Mansour.

According to representatives of the tourism sector of the Sharm El-Sheikh, many five-star hotels by 50% or more filled with Russian tourists, especially in the coming Christmas holidays, when the Red sea comes the “high” season. “Hotels, sightseeing companies, restaurants and cafes, entertainment centres, shops, — all will die if the Russians refuse to come to the resort, we’ll all be out of work,” worries tourist guide Ahmed Mustafa.

According to the employee of the international airport of Sharm El-Sheikh, before the crash of Russian airliner airport was receiving daily more than 20 flights only from Russia. “Thousands of Russian tourists every day. Russian tourists are key for us, they are the basis for the tourism sector of our city”, — he told.

According to statistics from disaster A321 every fifth Russian, who went out of the country abroad, went on holiday to Egypt. Now the airport of Sharm El-Sheikh and other Egyptian resorts only works on the removal of the Russians.

In search of a way out of the crisis

The Egyptians hastily trying to find an alternative to Russian tourists. Head of the Egyptian Union for international Affairs Walid Auf Sunday called for a special financial assistance Fund to the tourist sector for the coming period. Sound and calls to urgently seek alternative sources of attracting tourists in the Arab countries and even in Egypt at the expense of development of internal tourism. “We need to negotiate with Arab countries in Europe to attract tourists in Egypt, to develop business tourism, to offer attractive programs and packages,” says Auf. He also called on the Egyptian authorities to provide emergency support to the tourism industry, to avoid her slipping into a deep crisis.

Gossip is worse than the bitter truth

The office for the revitalization of tourism in Egypt in the last days leads to sad Egyptian tourism figures: the Russian and British segment of the industry rose from 70% to 83% of the total tourist flow. After the disaster A321 and the suspension of air links with Egypt first from Britain and then Russia, this flow decreased to 30%, but these figures are grieving, because the number of tourists from the European countries not to impose ban on flights to the Egyptian resorts, is also gradually reduced due to the General negative trend.

According to the Deputy head of the administration of Islam Nabil, the tourism industry of Egypt “can only be saved by prompt investigation of the disaster and the announcement of its results, whatever they are”. “Uncertainty and gossip is much more detrimental to tourism than even the worst, but published and experienced news,” he said.

According to the Ministry of tourism of Egypt, the tourism sector accounts for 11.3% of GDP and provides more than 14% of currency revenues to the Treasury. Before the outbreak in January 2011 in Egypt, the unrest that led to regime change, “the country of the pyramids” was visited by about 15 million tourists a year, then this figure fell sharply.

The influx of tourists recent years, the negative impact of the unstable political situation, the collapse in security and rise in the North of the Sinai Peninsula of terrorist groups associated with the “Islamic state” and “al-Qaeda”, the explosion at the Italian Consulate in Cairo, the failed terrorist attack in Luxor, the murder of the attorney General, the capture and punishment of a citizen of Croatia, the shooting of a group of tourists from Mexico.

Before the disaster over Sinai Egypt expected by the end of 2015 to welcome about 10 million foreign tourists. At the end of August this figure was 6.6 million, 5% more than the same period last year. The income from tourism by the end of 2015, it was projected at 7.5-8 billion dollars. In the first place by the number of visiting Egypt tourists is Russia (about 3 million tourists a year), the second and third — great Britain and Germany.