Kerch ferry crossing will continue to be used for the transport of goods and after commissioning the bridge across the Strait, said transport Minister of Crimea Andrey Bessalov. 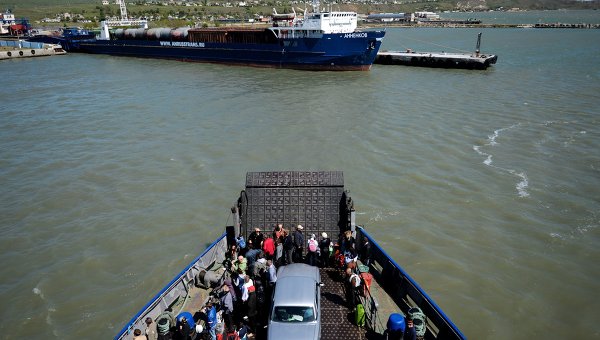 SIMFEROPOL, 9 Nov. Cargo traffic through the ports of the Crimea and the Kerch ferry with the commissioning of the bridge across the Strait will not stop, said in an interview with the Minister of transport of the Republic of Crimea Andrey Bessalov.

Ferry crossing through the Kerch Strait (ferry port Crimea — port Kavkaz) — the main transport artery linking the Crimea with mainland Russia. It is used for transportation of both freight and passenger cars. By the end of 2018 it is planned to build and put into operation the bridge across the Kerch Strait.

“But even after the construction of the bridge will not eliminate the need for the transport of dangerous goods, e.g., fuels. In addition, it is often cheaper to carry out transshipment of loose bulk cargo or inert construction materials through the ports. Transportation of oversized or heavy cargoes will also occur by sea, bypassing the bridge, possibly using the current ferry crossing. Passenger crossing after the construction of the transition will obviously lose its meaning,” said Bessalov.

The Minister also noted that infrastructure and the existing area of the ferry terminal in the future can be used as a yacht Marina.

The full text of the interview is available on the website>>