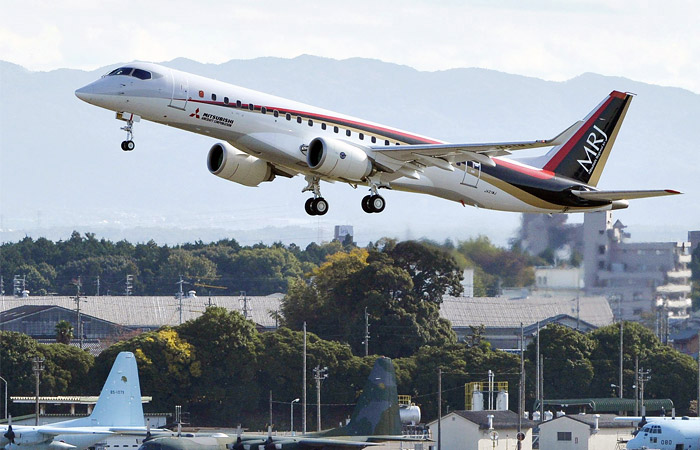 The liner, manufactured by a division of Mitsubishi Heavy Industries – Mitsubishi Aircraft, took off from Nagoya airport and were in the air over the Central part of Honshu island within the hour.

Economical light aircraft designed for 70-90 seats (for the debut was used on the 88 seats), later you may receive a modification of the 100 seats. It announced $46.3 million to $47.3 million, writes The Wall Street Journal.

The main colour of the livery MRJ-90 – white, complemented with gray, blue, red and gold.

The MRJ project was launched in 2008, expenditure on R & d amounted to more than 200 billion yen ($1.6 billion). Initially debut flight of the MRJ-90 is expected over five years ago, but the program faced a number of unforeseen circumstances. The last one was a problem with the rudder pedals, cockpit, revealed at the end of October.

Despite the delay, Mitsubishi Aircraft still intends to start deliveries of the new aircraft to customers in 2017. The first MRJ-90 88 seats will receive All Nippon Airways (ANA).

While carriers, including ANA, American Trans State Holdings, SkyWest, Eastern Air Line and Air Mandalay from Myanmar, ordered a total of 407 aircraft (223 in firm orders and 184 options for re-ordering). The largest order (200 liners) placed SkyWest is the largest regional airline in the world.

In 1974 in Japan was discontinued turboprop YS-11 the company Nihon Aircraft Manufacturing Corporation (NAMC), produced since 1962. During these 12 years has sold just 180 of these aircraft.

After 1974, the Japanese manufacturers occupied an important place in the market of Airliners, but only as component suppliers. For example, Mitsubishi Heavy and other Japanese companies have delivered about a third of the components of the Boeing 787 Dreamliner.

A new liner Mitsubishi Aircraft expects to push back the Brazilian Embraer and canadian Bombardier in the regional passenger aircraft. This is the market trying to break through the Russian company Sukhoi and Chinese Commercial Aircraft Corporation of China (COMAC).

According to estimates of consulting firm Ascend Flightglobal, until the end of 2034 airlines will order 4,36 thousand regional jets worth about $135 billion Company read Mitsubishi Aircraft market share to 27% in quantitative and value terms.