CAIRO, November 11. Monthly Egypt’s losses after the decision of Russia and Britain to suspend air service to the Arab country could be $273 million, stated on Wednesday the Minister of tourism of Egypt Hisham GaAs.

Without the tourism industry of Egypt: implications 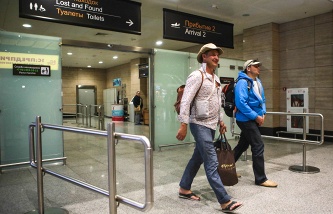 More than half of Russians vacationing in Egypt had returned home

Dvorkovich: no prohibitions and restrictions for foreign tourism will not be

He also noted that his Department is doing everything necessary to “minimize the losses”, specifying that if the crisis will last for three months, Cairo will lose 6.6 billion Egyptian pounds (around $820 million at the current exchange rate). However, Zaazou stressed that the authorities intend to apply to domestic tourism. For these purposes, he said, approved a budget of $5 million from the Fund for Ministry.

Earlier the Agency reported that Egypt’s losses due to the departure of Russian and British tourists that followed the collapse of the liner A321 in the sky over the Sinai Peninsula, the daily amount to about $4 million.

Russian citizens account for the largest number of tourists in the General stream of foreigners arriving in Egypt. In second place – citizens of the UK, the third – the Germans. In the resort town of Sharm El-Sheikh 50% of the tourism industry is run entirely by Russians. In 2014, Russian tourists accounted for one third of all tourists coming to Egypt, in Egypt after spending nearly $1.9 billion That is a quarter of the revenues of Egypt in foreign currency for the past year. According to estimates of the Ministry of the Arab Republic of each Russian citizen, while on holiday in Egypt, spends the day at $57.

Tourism revenues account for about 11.5 percent of Egypt’s GDP and account for 14.5% of foreign exchange earnings. The Egyptian government had intended to increase revenues from the tourism sector from the current $9 billion a year to $26 billion by 2020.

On November 6, President Vladimir Putin agreed with the recommendations of the National anti-terrorism Committee to suspend air traffic with Egypt. As explained by the press Secretary of the head of state, Dmitry Peskov, this measure is no pending investigation of accident of plane a-321 of airline “Kogalymavia”, until then, until will not be provided the proper level of security.