Cooperation of the Eurasian economic Union and the Economic belt of the silk road it is possible to ensure through the implementation of infrastructure and industrial projects of China in the countries of the Union. 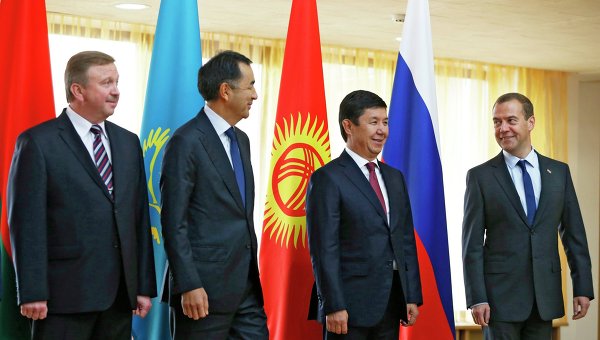 ASTANA, 11 Nov. The implementation of infrastructure and industrial projects with China in the countries of the EEU is the possibility of cooperation between the Union and the Economic belt of the silk road (EPSP), but must comply with common rules in those areas, which are governed by the EEU.

This is the conclusion of international experts in the study of “Geo-Economics of Eurasia” presented at the meeting of the Astana club. The report was prepared by the Carnegie Foundation, the Chinese Academy of contemporary international relations, German Council on foreign relations, the Institute of world Economics and politics under the Fund of first President of Kazakhstan and the Russian international Affairs Council.

On Wednesday Astana hosted a meeting of the club — first in Kazakhstan a discussion platform bringing together representatives of the economic, political and expert elites from China, EU, India, Middle East, Russia and the United States. Former government officials of high rank, distinguished scientists, heads of leading scientific and research organizations in the Chatham House format, allowing to Express their opinion openly, discussed issues of development of Eurasia — the region where are concentrated more than 60% of global GDP, is home to about 3/4 of the population of the planet.

Challenges for the EEU and EPSP

Due to the very different institutional design of the EEU and APSP have great potential for cooperation, according to the authors of the study.

“The main opportunity is the implementation of infrastructure and industrial projects in China, member countries of the EEU in compliance with the common rules of the Union in those areas which they governed. All Central Asian countries are very interested in Chinese investments, given the growing trade and investment ties with China. Membership in the EEU development of these relations does not contradict”, — the report says.

However, pairing the EEU and APSP have to find answers to multiple challenges. The first and most important institutional weakness of the EEU.

“Despite the declared “four freedoms”, many normative documents of the Union full of references to national legislation of member countries… depending on the developments on the member countries can change the rules of the game without warning. Actual restoration of customs control on borders of Russia with Kazakhstan and Belarus — proof”, — experts say.

The second challenge is the precise meaning pairing the EEU and APSP. “The statement about the pairing of the two projects was signed by the EEU solely by the President of Russia. In these circumstances, other countries-members of the Union signed with the Beijing instruments of reconciling their strategic initiatives with APSP on a bilateral basis… due to the lack of coordination between member countries of the EEU in relation to EPSP “pairing” can be reduced to a set of bilateral projects between Beijing and Central Asian countries”, — experts say.

The third challenge — the prospects of creating a free trade area (FTA) between the EEU and China. The Eurasian economic Commission, a supranational body of the EEU has already received a mandate for negotiation. However, between the member countries until a consensus on this issue because there is a risk that the opening of domestic markets of the EEU would in fact destroy the local industry from unfair competition with enterprises of the PRC.

“At the same time to consider establishing a single retail space in Central Eurasia without an FTA between the largest economies of the center of the continent is impossible,” say the authors of the report.

The fourth challenge is the future integration of modes of free trade that will emerge in Central Eurasia, including the Eurasian economic Union and possible free trade zone between the EEU and China.

“Now in the Asia Pacific region there is a competition between two powerful factions, trying to create a free trade regime. The first is the U.S.-led coalition on the formation of the TRANS-Pacific partnership is unprecedented in the degree of liberalization of trade rules agreement, which will cover not only trade in goods but also services and intellectual property rights. The second group of countries is negotiating for the establishment of a Comprehensive regional economic partnership — less ambitious in the level of detail and the liberalization of market access. The second group of countries headed by China,” reads the study.

Experts believe that the future is in the format that you created earlier. “Given the scale of the market, certainly in the future for this regime wants to join Russia, that will put the issue of adaptation of the provisions of the EAEC TTP or WRAP. But there can be problems because of the opinions of other participants of Eurasian economic Union (in particular Belarus, with a fundamentally different economic structure than Russia and Kazakhstan, as well as less focused on Asian markets),” reads the report.

Finally, the fifth challenge is the harmonization of the norms of the EAEU and the conditions of implementation of projects of EPSP with EU standards. “All the transport projects in the framework of the Chinese strategy of EPSP also focused on the EU. In these conditions between China, the EU and the Eurasian economic Union must begin a dialogue about the necessity of harmonization of standards, their application and the specific mechanism of coordination of positions” — experts say.

To cooperate with APSP together or separately?

Currently, many experts are considering whether it is expedient to communicate the project EPSP at the level of groups of countries like the EEC, or more efficient to do it in a bilateral format.

During the visit of the PRC President to Russia XI Jinping signed the Declaration on pairing the EEU and APSP. Meanwhile, Kazakhstan has announced its intention to coordinate with the Economic zone of the national plan of infrastructure development “Nurly Zhol”. Similar agreements have been reached with Belarus, Kyrgyzstan and Tajikistan.

During the three-day session at the Astana club, all participants agreed that the interaction with EPSP should be conducted at the level of the EAEU. Director of the Kazakhstan Institute of world Economics and politics Sultan Akimbekov noted that “there were serious discussions on this issue, but all favoured pairing, although Chinese colleagues emphasized the need to develop relations in all formats”.

“The EEU and EPSP — a bright future”, believes Director of the Center for joint development with neighboring countries and the Centre of Russian studies at East China normal University Feng Shaolei. In his opinion, interaction with EPSP at the level of the Eurasian economic Union and bilateral negotiations must go hand in hand. “Maybe it is easier to start in the bilateral format, but in the end it is necessary to work at the level of regional organizations”, — said the expert.