In the President’s address will also be indicated the position of the acute issues related to social policy,according to deputies and senators. Previously, a number of experts stated that the message will be traditionally affected by domestic economic issues, however, the international agenda will prevail. 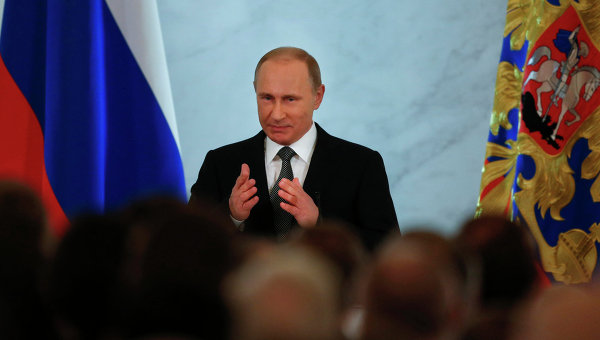 MOSCOW, 12 Nov. Russian parliamentarians surveyed, believe that the President of the Russian Federation Vladimir Putin in his address to the Federal Assembly, may devote considerable attention to topics of international relations and security, and economic situation in the country.

The head of the international Committee of the Federation Council Konstantin Kosachev believes that the message of the President we can hear the answers to the questions, “which concern the majority of the Russian citizens in it, without exaggeration, a fateful time: the national interests of Russia in the 21st century, the sustainability of the country’s sovereignty to external pressure, new ideas for the world to overcome joint challenges and threats”.

In the interview, the Senator also did not rule out that the message will be touched upon international security, counter-terrorism, including the ISIL, the situation in Syria and Ukraine.

“The main theme of the day — security. In my opinion, the spirit and the message of the President… will be largely determined by the results of the investigation of the tragedy of the Russian aircraft in Egypt”, — said the first Deputy Chairman of Committee of Federation Council on defense and security, member of the General Council of the party “United Russia” Franz Klintsevich.

“But in any case, the President will say that we — Russia is not going to back down and will fight against terrorists until the end,” said the Senator. He also expects the head of state specifies its proposals of creating a broad antiterrorist coalition.

Vice-speaker of the state Duma from LDPR Igor Lebedev considers that the main theme of the messages will include such topics on the international agenda, as the conflicts in Ukraine, Syria and the collapse of the liner A321 on the Sinai Peninsula.

“I think that the main theme of the message will be the international situation in connection with the conflict in Ukraine, in Syria, where we are now actively helping the Syrian government, the situation of the crash in Egypt — all this can not go unnoticed, all this must find a reflection in the President’s address to the Federal Assembly”, — said Lebedev.

The Chairman of Committee of Federation Council on constitutional legislation Andrey Klishas believes that special attention in the President may be paid to civil society in Russia and enhancing its role.

“I wish the President referred in his message to the theme of enhancing the role of civil society primarily of socially important organizations,” the Senator said.

The head of Committee of Federation Council on social policy Valery Ryazansky expects the message to confirm the state’s social commitments. “I would like to address to receive the confirmation of the state social policy, which is outlined in the decree of the President. By 2018 we need to keep strictly to the stated previously in the social sector line, despite sanctions, the economic situation in the country and in the world,” he said.

Senator does not exclude that in order to avoid degraded quality of life of people requiring support from the state, the government will have to take on additional responsibilities.

“I hope that the message will be said about resources, which this line of social policy will be able to withstand. Yes, should be optimization, internal resources. But, I think, will need additional state support for certain categories of persons — invalids, children-invalids, children-orphans, plus issues related to the liquidation of dilapidated and emergency housing,” he said.

First Vice-speaker of the state Duma Ivan Melnikov (CPRF) has declared that the message he wanted to hear positions on sensitive issues of social direction.

“Want to hear a hard assessment of what is happening with the pension system where the government takes unprecedented step, refusing to index them to the inflation rate. To understand the position on most pressing issues related to social policy. In the proposed next year budget for the entire social field is applied to a sensitive Israeli strike, while it is there, in person, because they invested in the social system, in the improvement of solvency — is the engine of the economy, demand, growth,” — said the Agency interlocutor.

Deputies and senators concurred, that in the context of discussion of the budget a significant part of the message may be devoted to the theme of the economic situation in the country.

The first Deputy head of the economic Committee of the Federation Council Sergey Kalashnikov would love to hear how it’s actually implemented objectives to diversify the economy. Another important topic, according to the Senator, remains the fight against corruption and inefficient use of public funds.

“The issue of inflation is also relevant. It seems to me that the inflationary indicators that are included in the budget 2016, is not quite true,” said Kalashnikov.

He suggested the use of inflation as a stimulus for the development of the domestic economy. “Thus it is necessary to establish an effective mechanism of social protection, since inflation is primarily a blow to our citizens,” he added.

The MP has also proposed a moratorium of five years on any changes of tax legislation and to introduce Russian currency regulation.

First Deputy Chairman of the faction “Fair Russia” Mikhail Emelyanov believes that the main theme of the message may be the theme of overcoming the economic downturn and the easing of fiscal policy.

“I don’t know what the President will say, but what is most important, in my opinion, is the solution of economic problems, overcoming of recession and start economic growth in Russia. I expect the President will say about the change in economic policy, will provide guidance on policy easing the Central Bank, easing of budgetary policy, in order first to put the development of industry and agriculture. But on the other hand, the extent to which those expectations are met, I don’t know,” said Emelyanov.

According to first Deputy Chairman of the state Duma Ivan Melnikov, the Communists and an important block associated with the forthcoming elections.

“Today we are concerned mainly topics such as the creation of truly equal conditions for all and especially for independent candidates, the introduction of mandatory debates, including the first persons of party lists, minimising the damage from spoilers, which are parasitic on existing party brands and mislead the voters,” the MP said.

The Vice speaker from the liberal Democrats Lebedev is sure that Putin will pay minimal attention to the topic of the upcoming parliamentary elections in 2016.

“On this subject all is already solved: all the laws enacted, and rules of the game written. Change those rules now, nobody will. So, I think the topic of elections to the Parliament will be given minimal attention. Just elections are appointed, the law has already been signed, nothing left to discuss, all participants preparing for the race”, — said Lebedev.