In the SFD fully finished transmission system of charging, which was built by the representatives of Rosavtodor, said the head of the Siberian division of “RT-invest the transport system” Denis Krylov. He noted that it was accepted without comment, so the infrastructure is built. 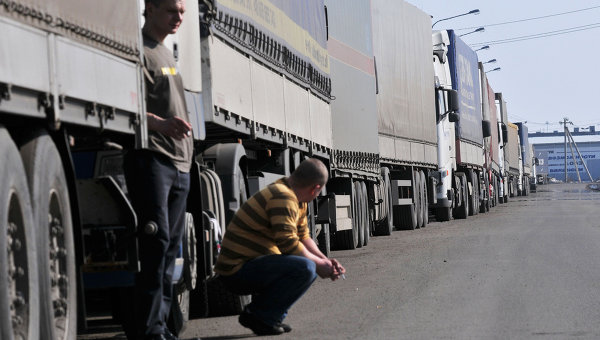 NOVOSIBIRSK, 12 Nov. The system of collection of tolls on Federal highways in the Siberian Federal district regions are ready to start work from November 15, told reporters on Thursday the head of the Siberian division of “RT-invest the transport system”, which is the system operator, Denis Krylov.

15 November Russia introduced a system of collecting fees for damage of automobile Federal roads by trucks weighing more than 12 tons. Originally intended to set a rate of 3.73 per ruble per kilometer, then the decision was made to gradually increase. Until 29 February 2016 the fee 1,53 rubles per kilometer, since 1 March 2016 to 31 December 2018 inclusive will be applied a factor of 0.82 that will provide reduced fees during this period to 3.06 ruble per kilometer.

“Today, in the Siberian Federal district is completely finished transferring system for collecting payments, which we have constructed representatives of the Federal road Agency (Rosavtodor). All was accepted without comment, and the infrastructure built,” said Krylov.

He noted that in the largest cities of Siberia was established on 23 customer support and a stream of applications for registration in the system in the last days, when it became clear that the entry into force of the law is inevitable, has become very significant.

“The system works. The day before yesterday we began issuing on-Board units (trackers). System mobile control yesterday departed from Novosibirsk on all of our regional offices,” he said. Mobile systems represent a Lada Largus cars with video cameras and radar that reads the numbers of the vehicles and transmits the information to the data Center.

Krylov added that the stationary control system 70 large part — in Siberia will be built in 2017 and until that time the system will work using the mobile monitoring systems. According to him, currently in Siberia in the system was registered about 6 thousand car owners with 12 thousand cars.

The requirements of a “fair plan” and postpaid

The members of the Siberian Association of automobile carriers continue to disagree and plan to abolish tolls on Federal roads heavy vehicles or mitigation requirements, said to journalists on Thursday, President SAP Vyacheslav Origin, who was fined for campaign held on the eve of the truckers.

Truckers and owners of heavy vehicles in many regions of Russia on Wednesday held a protest against the launch of the system of levying tolls on Federal highways with vehicles with total weight exceeding 12 tonnes. The action at Novosibirsk has collected according to the organizers, more than 300, according to police, about 150 trucks.

“Although we tried to act strictly according to the law, but had violated some rules of agreement, the Protocol, and the court took the decision on the fine. I as the organiser of the event paid 20 thousand rubles”, — said Introduction.

He reported that the Siberian truckers, despite some easing of requirements for the introduction of a system of payment for travel on Federal highways and the imposition of a period when the penalties for non-payment will be charged in the regions up to may 1, will continue to defend its position.

So, carriers believe a reasonable rate of 0.64 rubles per kilometer, and in addition are asked to enter the post-payment of travel and a test mode during which the fee will not be charged.

“According to our data, the introduction of fees will affect all consumers in the country. The cost of goods will increase from 5% to 10%,” said the Origin.

The decision not even the day before yesterday

The introduction of tolls 12-tinnikov was taken long ago, and it was all known, and the shares of truckers is an attempt to influence him at the last moment, the head of Ministry of transport of Russia Maxim Sokolov.

According to him, representatives of the transport business knew about the decision and were preparing for it. The head of the Ministry of transport said that the decision to introduce fees for 12-tinnikov was made “not yesterday and not even the day before yesterday”.

“This decision was in accordance with the Federal law that was passed by the Parliament, in 2011, in June 2013, the government of the Russian Federation in its decree defined the main approaches to the administration of the system and procedure of charging of heavy vehicles,” — said Sokolov in interview to TV channel “Russia 24”.

The Minister believes that the protests were supported mostly by private truckers who “are now trying somehow to influence has long been adopted and actually implemented solutions.”