LONDON, November 13. The German automobile concern Volkswagen is going to buy out the residual value of their cars from the owners who wish to return them due to the mismatch between the real emissions of carbon dioxide (CO2) is claimed to be. This was reported on Friday the electronic version of the newspaper Financial Times. 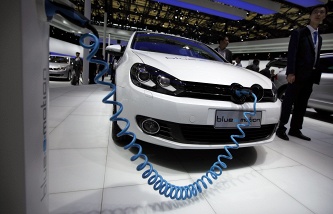 “Volkswagen is prepared to buy back some of its cars sold in Europe that fell under the “inconsistencies” identified last week during checks on CO2″, – notes the edition.

Last week Volkswagen announced that in the course of internal audits in 800 thousand cars of the concern, predominantly with diesel engines, there were inconsistencies with regard to carbon dioxide emissions. “In our estimation may be affected about 800 thousand cars of concern. Economic risks, according to preliminary data, is estimated at 2 billion euros,” said the giant. Now, according to “financial times”, the Corporation is conducting additional tests to confirm or refute these data.

“We have to think about what people might want to return the machine, – the newspaper quotes the words of an employee of Volkswagen. – When do we get the test results, then the people will have the opportunity to say: “I can return my car because you told me false data.”

The Volkswagen group is not going to buy all 800 thousand cars, which could potentially touch the “diesel scandal”, Financial Times notes. In this case, the company would have to spend $12.9 billion According to the newspaper, Volkswagen has reserved for this purpose $2.15 billion.

Volkswagen was at the center of a scandal after the discovery on vehicles with diesel engines are software that allows you to bypass strict ecological standards of the USA. Investigation regarding the company started in several countries in Europe and Asia. As noted in the press release of the automaker, the problem of falsifying data environmental tests on the content of harmful substances of exhaust gases of cars affected up to 11 million cars worldwide.