Moscow. November 13. The President of Russia Vladimir Putin said that the conduct of Turkey’s independent foreign policy worthy of respect.

“Against the background of the introduction of U.S. and EU unilateral sanctions Turkey has occupied an independent position. Conducting independent Ankara, the national interest foreign policy, deserves great respect,” said Putin in an interview to news agencies “Interfax” and “Anadolu”. 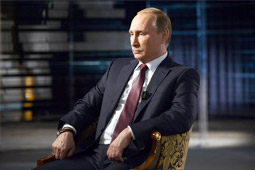 According to the Russian leader, “this pragmatic approach opens new horizons for the development of Russian-Turkish cooperation, first of all, its a business component”. “Turkey has been a priority of foreign economic partner”, – said the head of state.

He said that last year bilateral trade amounted to more than $31 billion.

“Priority is given for high-technology industries – energy, including nuclear, telecommunications. Another important area is tourism,” said the President of the Russian Federation.

“In General, the potential of bilateral trade and economic relations is not fully revealed”, – said the President of the Russian Federation.