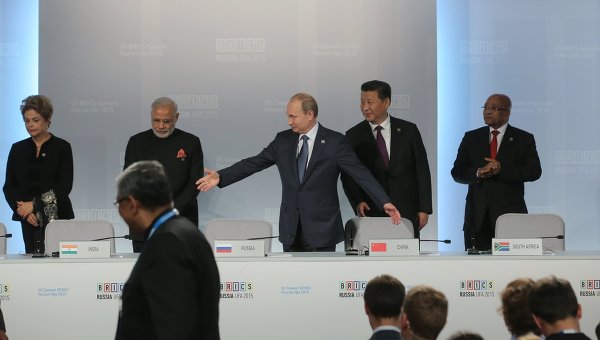 ANTALYA (Turkey), 15 Nov. To increase the volume of trade between BRICS countries will help comprehensive implementation of the Ufa economic cooperation strategy until 2020, said the President of the Russian Federation Vladimir Putin at an informal summit of the leaders of the BRICS countries.

According to him, the subject of “the twenties” resonates with the themes that the BRICS works directly.

“First of all, building a truly open world economy, increase and diversification of trade, transport, technological exchanges, reform of the global monetary and financial system, enhancing the role, including developing countries in the IMF. To address these problems is directed adopted by the BRICS countries in Ufa, Russia strategic economic partnership till 2020”, — said Putin.

He is convinced that the implementation of this strategy will strengthen “complementarity of the economies of the BRICS will allow the Shire to leverage shared resources and reserves to increase trade flows and investments”.

The Russian leader stressed that improving the efficiency and reliability of the global financial system facilitates the launch of full-scale work development Bank and a currency reserve pool of the BRICS countries with a total amount of 200 billion dollars.

“These new institutions to allow our Association to independently carry out strategically important programs of cooperation,” the President added. He reminded that currently the development Bank of the BRICS is actively engaged in the selection of high-tech and infrastructure projects, funding for which will begin soon.