DONETSK /Rostov region/, November 16. /Corr. Dmitry Bulanin/. The VGTRK cameraman Viktor Denisov in the trial of former Ukrainian army Hope Savchenko said that the shelling near Lugansk, which killed his colleagues, started suddenly, when they were shooting, the correspondent of TASS from the court. 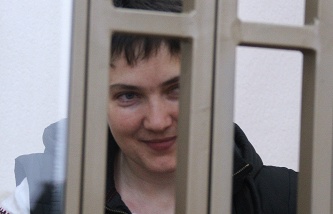 The head of the HRC hopes to return home Savchenko, Alexandrov and Erofeeva

Witness in court: Savchenko was wounded when he was captured by the militia DND

According to Denisov, he and his colleagues Igor Kornelyuk and Anton Voloshin went to shoot a story about the evacuation of refugees from the village of Metalist. “Nobody could assume that will start fighting. Metalworker in the 16-th (June 2014 – approx.TASS) everything was quiet. The refugees themselves were from the post of GAI at a distance of about 150-170 m. it went To the militia to tell them to leave. At this point, sounded the first blast exploded near the militia. Then there were more explosions. I was very surprised that they happened behind me. After 3-5 breakup, I realized that dangerous to be here,” said Denisov, who is the victim in the case.

According to him, there were the transporters, but to hide under them was impossible, as the terrain was clearly visible.

“After another explosion I realized that I needed to run to an open area – the guys where I came from, and to flee into the forest. When I ran for the refugees, I was videotaped, I thought, if you kill – there will be footage, as it turned out. When I ran out, became visible and thought can kill,” said the victim.

He noted that passing through the forest with the refugees, he later managed to drive to a rented apartment, where the phone was. Call colleagues failed. He later learned that Kornelyuk died in hospital, and Voloshin killed in the shelling. Denisov had identified their bodies.