MOSCOW, November 17. The state Duma on Tuesday will consider a draft statement “About the need for immediate establishment of an international anti-terrorist coalition” in connection with recent attacks in France and Lebanon.

“At present France and other European States, in fact, paying the price for shortsighted and self-serving politics of Washington. It is a long time that the responsible Nations of the world, putting aside tactical differences, have chosen to build a broad coalition to fight terrorism following the example of the anti-Hitler coalition, which became a true example of uniting many countries and peoples against the common enemy”, – stated in the text of the document prepared by the Duma Committee on international Affairs. 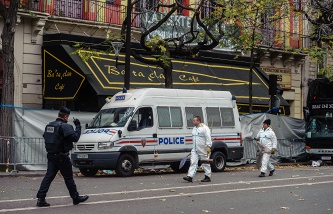 Media: the owners Bataclan has received threats from terrorists

Report: victims of terrorists in 2014 in the world were 32.6 thousand people

Deputies indicate that the tragic recent events confirm the accuracy of repeated warnings from Russia that the permanent destabilization of the situation in the middle East by those who claim global dominance, especially the US, will result in expansion of the zone of bloody chaos and numerous human tragedies.

“Obviously, irresponsible and vicious policy of the West, held under the slogan of exporting democracy has led to the emergence and strengthening of the so-called Islamic state, and attempts to use radical groups as a battering RAM to overthrow undesirable regimes could lead to further negative scenarios”, – the document says. In the state Duma warned that “in the event that if not taken immediate and effective measures, including military nature, chaos in the middle East and North Africa threatens to overwhelm the wave of violence and terror of the neighboring States and regions of the world.”

Deputies indicate that “the terrorists calling themselves Islamic state, declared war against not only Syria and Iraq, but France and other States involved in counter-terrorism operations.” “There is a need to unite the efforts of the entire international community against terrorism, only such a Union will stop growing before our eyes terror,” convinced the state Duma.

In this regard deputies of the State Duma call on the parliamentarians of the countries of Europe, North America, Middle East and other regions of the world to do their utmost to create international anti-terrorist coalition. “This commits the necessity of human life and moral duty to the victims of terror,” is the statement.

At the same time the chamber wishes to Express condolences to the families of the victims of the terrorist attacks in Paris and Beirut.