UN, November 17. /Corr. Oleg Zelenin/. Russia is outraged stuffing information about casualties among civilians and damage to civilian infrastructure, which allegedly led air strikes on terrorists in Syria. This was stated on Monday, the Deputy permanent representative of the Russian Federation to the UN Vladimir Safronkov at the meeting of the Security Council of the world organization.

According to him, to speculate on the humanitarian theme “in an attempt to score political points is simply immoral”. “In this context are outraged by different kinds of stuffing information regarding alleged civilian casualties and damage to civilian infrastructure as a result of air strikes of the military space forces Russia”, – said the diplomat. 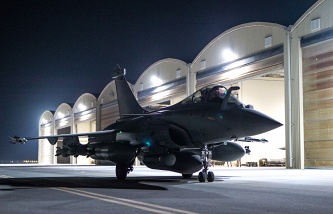 He noticed that the operations VKS RF is attended with daily briefings for Russian and foreign journalists, which “provides an objective picture of what is happening razvenchivaet of misinformation and disinformation”.

As an example, Vladimir Safronkov brought the case on October 20, when media reports emerged about the bombing of a hospital in the Syrian province of Idlib, “in which allegedly there were victims among the civilian population”, cited photos of destroyed buildings. “However, satellite photography taken on October 31, the hospital in Sarmin is alive and unharmed,” – said the diplomat.

Zampolpreda of the Russian Federation noted that this false information was reflected in the previous UN report on Syria, and expressed regret that the new report of the world organization “didn’t have the courage to refute insinuations concerning the actions of the Russian space forces”.

Commenting on the overall situation in Syria, he reiterated Russia’s position that to achieve real improvement is possible “only through the achievement of a political settlement in parallel to resolutely fight terrorism.” According to him, in the international community “there is a growing awareness of the need for a comprehensive anti-terrorism coalition under the UN auspices”.

As emphasized Safronkov, recent terrorist attacks in Baghdad, Beirut and Paris “convinced that terrorism cannot be justified by anything, but anything more cannot be justified passivity and fragmentation in the fight against this scourge”. “We reaffirm our willingness to work together”, – said the diplomat.