MOSCOW, November 18. The security of Russia’s dairy production is at the level of 77-80%, said Deputy Prime Minister Arkady Dvorkovich at the Dairy forum. 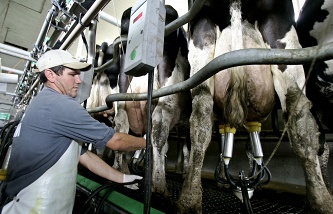 Gromyko: dairy production is a priority for the Ministry of agriculture of the Russian Federation

“Today in the dairy sector we have not yet reached the goals set for ourselves. We are teetering on the verge of about 77-80% saturation of domestic market with Russian products,” he said.

Thus, according to Dvorkovich, milk production in Russia will increase in 2015 by 0.8-1%. “The average annual growth rate should not be less than 3%. This year we will most likely be 0.8%, maximum 1%, I say this with great caution, not all problems are solved”, – said Deputy Prime Minister.

Tkachev stressed that it is necessary to increase the amount of compensation (costs) on dairy direction from 20 to 35%. According to the Minister, this will require in 2016, an additional budget of 20 billion rubles.

Benchmark rates for lending to the dairy industry is 5%.

Intervention in the dairy market

Dvorkovich also said that the government has not abandoned the idea of intervention on the milk market and at the moment working on that. 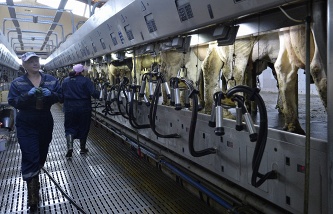 “Intervention on the milk market is a very productive idea,” he said.

According to Dvorkovich, the introduction of this mechanism will be useful to the market and avoid sharp fluctuations in prices. Now the government is “carefully considering” the issue, said Deputy Prime Minister.

Increase subsidization of the industry

The percentage of reimbursement of capital costs in the dairy industry of the Russian Federation will be increased in 2016. “Second, a new mechanism of support that everyone was waiting for is the subsidization of capital costs incurred. This mechanism will start working already this year, the relevant government resolution will be signed this week, and the first projects will be supported in December. While the level of compensation is 20%. I am sure that the percentage will increase in 2016, to 35% or not – until I’m last words to say” – he said.