MOSCOW, November 18. The LDPR suggests to postpone until November 15, 2016, the levying of tolls on Federal roads heavy vehicles weighing over 12 tons. The bill, introduced by a group of deputies from the faction of the liberal Democrats posted in the Duma’s electronic database. 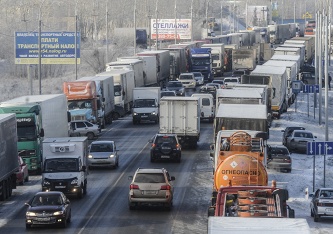 Drivers of heavy vehicles required to pay tolls on Federal highways from November 15 this year. Until 29 February 2016 will be charged in the amount of 1.53 rubles per kilometer. Later in the period 1 March 2016 to 31 December 2018 the tariff will be increased to 3.06 ruble per kilometer. Until may 1, 2016 owners of such vehicles will not be fined for the violation of this requirement outside of the Moscow region. It is supposed that the received means will be directed on repair of roads.

However, the deputies from the liberal democratic party are convinced that the entry into force of the said rules this year “will lead to a further decline in business activity, the growth of prices on various groups of goods and services, but also will aggravate the financial situation of producers located far from large cities.”

In the explanatory note to the bill its authors argue that “payment on account of compensation of harm (roads) puts at a disadvantage producers of goods from various Russian regions, depending on the degree of remoteness from the business centres”. “Manufacturers operating in the distance from major cities – consumers will be forced to raise rates, at least on the charge on account of compensation of harm on its products to offset the additional costs for transport services. Thus, such charges will further aggravate inflation and will reduce the competitiveness of producers from many regions of the Russian Federation”, – said the deputies of the LDPR.

Moreover, referring to estimates of experts, parliamentarians indicate that the toll collection system has not been tested sufficiently elaborated that as a result can become “illegal accrual of administrative fines”.

Earlier in the state Duma was introduced a bill to reduce penalties for non-payment of fees for heavy trucks to travel on Federal highways. It was sponsored by the head of the Duma Committee on transport Evgeny Moskvichev (“United Russia”) and his Deputy Mikhail Bryachak (Fair Russia) and Vitaly Efimov (“United Russia”).