MOSCOW, November 18. United Arab Emirates is ready to promote Russia in the search and bringing to justice the perpetrators of the terrorist attack with Russian A321 aircraft over the Sinai. According to the press service of the Kremlin following the results of telephone conversation of Russian President Vladimir Putin and Crown Prince of Abu Dhabi and Deputy Supreme commander of the UAE Mohammed bin Zayed al Nahyan. 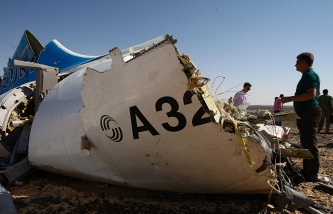 “Expressed the readiness of the UAE side to assist in finding and bringing to justice those responsible for this terrible tragedy”, – stated in the message.

The crown Prince of the UAE again expressed on behalf of the leadership and people of UAE “condolences for the barbaric terrorist attack” from the Russian ship.

In a telephone conversation “stressed the importance of consolidating efforts of the international community to effectively combat international terrorism”. “Putin gave detailed information about various aspects of Russian activity aimed at unblocking the Syrian crisis, including on the specific results of the operation of the aerospace defence forces against ISIS and other radical groups”, – reported in a press-service of the Kremlin.

The parties agreed “to maintain close contacts between relevant agencies and coordinate steps towards implementation of the outcomes of meetings in Vienna of the International support group in Syria”.

Putin and Mohammed al Nahyan exchanged views on further deepening Russia-UAE cooperation in various fields in line with the agreements reached at the bilateral talks on 11 October in Sochi.