19-21 November 2015 in the capital of Russia will be Federal Arctic forum “the Arctic Days in Moscow”. The forum is a continuation of the Festival of Arctic events “Days of the Arctic”, which has been held since 2010.

In addition, in the Museum of Moscow will open multimedia exhibition “the Arctic”, which will run from 21 November 2015 to 8 January 2016. Visitors can see installations of the underwater world of the Arctic seas, with a unique 3D model of the research platform “North pole”, and also see the photographs from polar expeditions.

Arctic – Northern polar region of Earth that includes margin of Eurasia and North America, almost the entire Arctic ocean with its Islands, except for coastal Islands of Norway and adjacent parts of the Atlantic and Pacific oceans. Its area is about 27 million square kilometers.

With the “Arctic border” five countries: Russia, Canada, USA, Norway and Denmark. The total length of the Arctic coast all the surrounding States 38 700 km Maximum length of the borders in the Arctic is Russia – 22 600 km.

The history of exploration

In the XI century, Russian explorers began to explore the coast of the Arctic ocean. In the XII-XIII centuries the Pomors were discovered Islands Vaigach, Novaya Zemlya, and in the end of XV century – the island of the Spitsbergen archipelago and Bear island in the Barents sea. In 1533, on the Murmansk coast of the Barents sea was founded Trifonov Pechenga monastery, which, along with the Solovetskii monastery in the White sea, founded in 1429, was an important point of Arctic exploration. The main Russian port in the European North of Russia until the XX century Arkhangelsk was founded in 1584 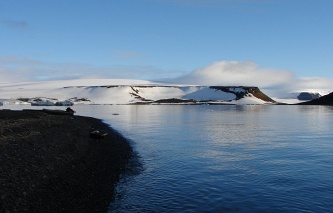 In 1648 the Cossack ataman Semyon Dezhnev took a sail along the coast of Chukotka, opening the Strait between Asia and America, and made a drawing of the rivers of Anadyr and Anyuy.

In 1728, during the First Kamchatka expedition organized by the decree of Emperor Peter the great, Russian Navy officer Vitus Bering confirmed the existence of the Strait between Chukotka and Alaska. In 1733-1743 the Russian Arctic, explored the Great Northern expedition led by Vitus Bering, brothers Dmitry and Khariton Laptev, Stepan Malygin, Seeds, etc. Chelyuskin expedition Members during the boat and Hiking for the first time have mapped almost the entire Russian coast of the Arctic ocean, the shores of the Okhotsk and Bering seas.

They were opened, the Alaska Peninsula, the Aleutian and commander Islands. In 1741-1742, Semyon Chelyuskin Hiking described the Western and Northern coast of the Taimyr Peninsula, where they found the Northern extremity of Asia, which in 1843 was named in his honor at Cape Chelyuskin.

In 1873, the Austro-Hungarian expedition of Julius payer and Karl Weyprecht opened the archipelago of Franz Joseph, which in 1914 was declared Russian territory.

Since the late nineteenth century intensified the colonization of the Russian Arctic. In the 1870s, Arkhangelsk governors organized the resettlement of the Nenets on the island of the Novaya Zemlya archipelago for permanent residence.

In 1894 the government of the Russian Empire on the initiative of the Minister of Finance Sergei Witte developed a plan for the development of the far North. It was planned the construction of a port on the Kola Peninsula and the holding of a railway that would link it to the European part of Russia.

In 1900-1902, Russian polar expedition, equipped by the Imperial Academy of Sciences, led by Baron Eduard Toll and Alexander Kolchak (the future Supreme ruler of Russia) conducted a study on the Novosibirsk Islands, mapped the Arctic about 200 new geographical names.

In 1932 the Council of people’s Commissars of the USSR created General Directorate of the Northern sea route. The first head of the Department became a polar Explorer Otto Schmidt. In the same year he led the campaign icebreaking steamship “Sibiryakov”, which, for the first time in history passed the NSR in a single navigation (65 days).

In 1937 the Soviet pilots Valery Chkalov and Mikhail Gromov made the first successful flight over the North pole. In the same year in the USSR was organized the first drifting research station “North pole” under the leadership of Ivan Papanin. Subsequently, these stations operate in the Central Arctic up to 1991.

Active industrial development in the Arctic began in the 1930s and 1940s in the USSR. In these years were built Arctic ports of Igarka, Dikson, Pevek, Tiksi, founded the city of Naryan-Mar, Norilsk, Vorkuta, and etc. at the same time in the Arctic regions of Western Siberia were opened the first large reserves of oil and gas.

In 1948 to intensify geological exploration work in the region in Leningrad was created the Scientific research Institute of Arctic Geology (now all-Russian research Institute of Geology and mineral resources of the World ocean named after academician I. S. Gramberg). In the 1960s opened the largest oil and gas deposits in the region: Urengoy (1966), Yamburg (1969), Bovanenkovskoye (1971) and others.

In 1962, Soviet nuclear submarine “Leninsky Komsomol” surfaced at the North pole (in 1959, a similar action carried out the first naval fleet of the USA). In 1977 the Soviet nuclear icebreaker Arktika became the first surface vessel in the world, who managed to reach the geographic North pole.

Pictures from the history of Arctic exploration by Russia – in the gallery.

Read more about the history of the Arctic read