MOSCOW, November 19. Russia and Egypt signed an intergovernmental agreement on cooperation in the construction of the first NPP in this Arab Republic, consisting of 4 power units of 1200 MW each at the site in Dabaa area. This is stated in the message of “Rosatom”.

The document signed by the head of the Russian state Corporation Sergey Kiriyenko and Minister of electricity and renewable energy Muhammad Shaker in the presence of President of Egypt Abdel Fattah al-Sisi. 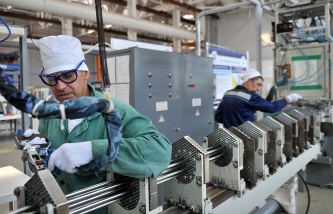 Ushakov: Russia is interested in the NPP construction project in Egypt

“The nuclear power plant in Dabaa will be the largest joint project of Russia and Egypt since the creation of the Aswan dam; it is truly a new page in the history of Russian-Egyptian bilateral relations. The first nuclear power plant will make Egypt a regional technology leader and the only country in the region with nuclear power plants of generation 3+”, – said the head of “Rosatom” Sergey Kirienko, quoted by the press service of the Corporation.

The agreement fixes the parameters of the first Egyptian nuclear power plant to be built on Russian technology, as well as further development of nuclear infrastructure in Egypt.

According to “Rosatom”, in mezhpravkomissii also spelled out the issues of ensuring the future nuclear power plant nuclear fuel commitments for operation, maintenance and repair of NPP power units.

The document also regulates the issues of SNF management, training of NPP personnel, assistance to Egypt in improving the system of norms and rules in the field of nuclear energy and nuclear infrastructure.

According to Kirienko, now the site Dabaa are the first Russian experts in early December to site the equipment arrives and will start survey work. In 2016, the National nuclear University MEPhI will begin training the first students from Egypt.

As reported, the parties believe that the project will be implemented in 12 years.

Survey work at the NPP site in Egypt will begin in December 2015. This is stated in the message of “Rosatom”.

“Now the site Dabaa are the first Russian experts in early December to site the equipment arrives and will start survey work. In 2016, the National nuclear University MEPhI will begin training the first students from Egypt”, – stated in the message of the Corporation.