MOSCOW, November 19. The President of Russia Vladimir Putin will on Friday, November 20, to participate in joint meeting of both chambers of the Federal Assembly. 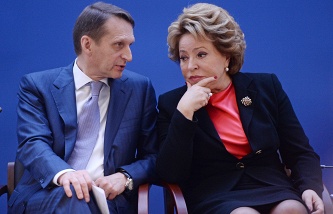 “No, the graph of the President there’s no such event”, – said the press Secretary of the head of state, Dmitry Peskov. According to him, “this will be the event of the two chambers of Parliament”.

Previously such a possibility was reported by the newspaper “Izvestia” with reference to sources in the state Duma.

About the conduct of the chambers of the Federal Assembly of the joint Assembly previously informed Duma speaker Sergei Naryshkin. “On Friday we are planning to hold a joint session of the two chambers of the Federal Assembly with participation of heads of regional legislative assemblies, representatives of religions, representatives of several community youth organizations. Theme – the fight against terrorism,” he said. “I would like to get out and on the adoption of the statement on this subject”, – said Sergey Naryshkin.

The Federation Council speaker Valentina Matvienko has confirmed that on November 20, the Federal and regional legislators will hold a meeting on which will discuss measures to combat terrorism. According to her, MPs and public representatives plan to discuss “the wide range of actions that need to take in Russia”. “First and foremost we are concerned about the national security of our country and our citizens”, – said the Senator. “One without the power of communities to cope effectively with this problem,” she concluded.