The participants of the joint meeting of the Federation Council and state Duma, in particular, propose to revoke the citizenship of those who joined the ranks of militants abroad, and to establish the prison and even to introduce the death penalty for terrorists. 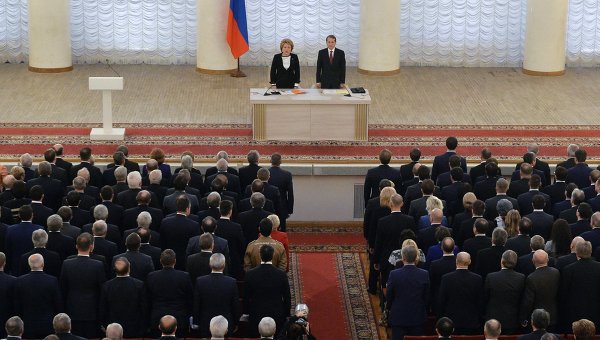 MOSCOW, 20 Nov. Russian parliamentarians at a joint meeting on Friday was called for active opposition to terrorism, both at national and international level. Among the proposals is the establishment of an international Tribunal for terrorists, the imposition of sanctions against States, cooperating with terrorist organizations.

In terms of changes in national legislation, it is proposed to revoke the citizenship of those who went abroad and joined the ranks of terrorist organizations, to create a special prison and even to introduce the death penalty for terrorists. All the participants of the meeting also called for the strengthening of security measures legislative and organisational nature in compliance with the constitutional rights of citizens.

Parliamentarians also expressed unanimous support for the actions of the Russian authorities on counter-terrorism, including military action in Syria.

The Federation Council speaker Valentina Matvienko has called for the establishment of the international Tribunal for crimes of terrorists.

“Together with our partners, we must work towards the establishment of an international Tribunal to severely punish terrorists and their accomplices who committed heinous crimes against humanity,” she said at the joint meeting of the Federation Council and the state Duma.

Matvienko reminded that these days mark the 70th anniversary of the start of operation of the Nuremberg trials for war crimes of the Nazis.

According to the Senator, it is proposed to expand the powers of the Russian security services, strengthen criminal responsibility, including aiding terrorism.

According to her, recently in the Federation Council have received many complaints from citizens and experts, offering specific measures. “Broadening the authority of law enforcement agencies, criminal responsibility not only for terrorism but also for its financing and for the dissemination of ideology,” — said Matvienko.

She stressed that these measures should not affect the constitutional rights of citizens.

Matviyenko has condemned interference in the Affairs of sovereign States. According to her, Russia should take steps that henceforth nobody in the world had no right to act like methods.

“Terrorist crimes have no Statute of limitations, and the retribution for these acts inevitably. An example of this is the fate that befell many of the terrorist leaders and fighters. They were and will always remain in the memory of people disgusting characters such vicious creatures, and not freedom fighters and rebels, how they would like to present,” Naryshkin said.

Parliamentarians of the Russian Federation should re-examine the legal basis of ensuring national security, strengthen the protection of Russian citizens and vital installations, said the speaker of the state Duma.

According to him, the tragedy of the Russian airliner A321, the terrorist attacks in France and other countries will force the world to understand that the geographical distance from the so-called “Islamic state” does not guarantee safety, and the results of the annual efforts of the so-called coalition led by the United States equal to zero, in contrast to the attacks of the Russian air and space forces in Syria.

The plans of the West on the extension of sanctions against Russia, according to the speaker, look ridiculous and wildly amid a terrible tragedy. “It speaks to the problems of political morality,” said speaker of the state Duma.

He also noted that Russia in the fight against terrorism will act in strict accordance with the Constitution and will not allow any isolation.

Sanctions against the Russian Parliament, introduced by the West, impede cooperation in combating terrorism, said head of the faction “United Russia” in the state Duma Vladimir Vasiliev.

“The largest Parliament, the largest countries are excluded from the possibility of cooperation with parliaments of other States, cooperation for the sake of saving lives,” said Vasiliev.

He also noted that the decrease in the level of terrorism in Russia has given the country a high price.

The death penalty for terrorists

“Fair Russia” proposes to introduce in Russia the death penalty as an exception only for terrorists and their supporters, said the party leader Sergei Mironov.

“Time “in war as in war”, in my speech today I will offer to amend the Russian legislation and, as an exception to the rule, to introduce the death penalty for terrorists and their accomplices”, — said Mironov.

Only air operations in Syria

The CPRF leader Gennady Zyuganov believes that Russia should continue air support to the Syrian army in fighting were banned in Russia by the terrorist group “Islamic state”, but it is not necessary to enter these areas for ground troops.

“I believe that law enforcement action taken by our country in the form of air support for the Syrian army, should continue. But it is not necessary to pull back the army because history shows what the results of such operations,” — said Zyuganov.

In the liberal democratic party called for improved measures to combat terrorism, as well as to take efforts to protect our citizens abroad.

Of the prison for terrorists

Vice-speaker Ilyas Umakhanov proposes to create in Russia a special prison for terrorists.

“I will add about necessity of creation of special correctional facilities for persons convicted of terrorism. It is impossible to put them together with the prisoners in other items. And there they continue the recruitment of militants,” — said the MP. According to him, in places of deprivation of liberty “comes one terrorist, and relatively speaking, out of potentially three or more”. “We need to block any loopholes in the reproduction of terrorism within the country”, — said the Senator.

The head of the constitutional Committee of the Federation Council Andrei Klishas proposed to restrict the profession to those engaged in the dissemination of extremist ideology, as well as to toughen the penalties for law enforcement officers, negligently neglected to ensure security in places of a mass congestion of people.

“We need to discuss the issue of strengthening responsibility for incitement of terrorist activity, for the spread of the ideology of terrorism,” said Klishas.

Suggestions have been made to deprive the Russian citizenship of those who took abroad part in terrorist operations and their families be deprived of the right of departure from Russia, said Chairman of the Federation Council Committee on defense Viktor Ozerov.

According to Ozerov, it is also proposed to include in the prison convicted on terrorist charges separately from citizens who were convicted under other articles. In addition, the Senator announced the proposal to establish a liability for non execution of decisions of the regional anti-terrorist commissions.

In addition, law enforcement agencies need to check the condition and circulation of weapons and explosives from the terrorist threat.

Sanctions for cooperation with terrorists

It is necessary to apply sanctions to States that have a dialogue with terrorist groups and support entrepreneurs and companies doing business with terrorists, said the head of the international Committee of the Federation Council Konstantin Kosachev.

“Our aircraft carried out the first successful attacks on convoys of oil. However, it is time to punish not only the seller but also the buyer. And here it is possible to do without military force. This is the case when sanctions would have been out of place in contrast to the Ukrainian case. Every entrepreneur, leading the business with terrorists, every nation that encourages such activities, must be named and punished by name,” said the Senator.

He also proposed to revoke the passports of Russian citizens who joined the ranks of terrorists.

“On each occasion the care is known in the terrorists are Russian citizens in Russia, as is done by some other countries, should be made the decision on cancellation of the validity of passports in order to restrict their freedom of movement and to improve the chances of their prompt arrest,” — said Kosachev.

In addition, Kosachev noted the need to conduct an awareness-raising campaign against the promotion of extremism and radicalism.