MOSCOW, November 20. The total amount of funds in creation of system for collection of tolls truck weighing over 12 tons “Plato” was more than 29 billion rubles. This was stated by the General Director of “RT-invest the Transport system” (implements the project “Plato”) Alexander Advisors. 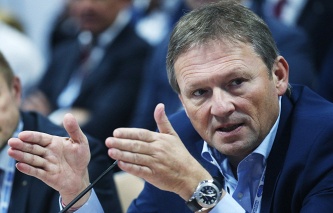 “The shareholders have invested more than 2 billion roubles, and we drew more credit from Gazprombank, the credit line is 27 billion rubles”, – noted Advisers, the radio station “Kommersant FM”.

He stressed that the state did not invest in the creation of “Plato”.

System “Plato” started to levy charges on account of compensation of harm, caused to the automobile roads of Federal value by vehicles, having the resolved maximum weight over 12 tons.

How to work the system

In the system of toll collection called “Plato”, for driving trucks weighing over 12 tonnes have already registered more than 300 thousand users.

To control the movement of trucks on Federal highways will be special cars equipped with photo enforcement cameras, and is also located on the roads construction of station control. Infrastructure for charging will create a commercial structure of “RT-invest the transport system” established specifically for this purpose.

It is planned that the collection of payments will bring more than 40 billion rubles to the Federal road Fund. The money will be spent on repairs of Federal roads, smashed by trucks.