MOSCOW, November 20. Russia is still waiting for debt repayment from Ukraine, I have not yet decided on its restructuring, said assistant Finance Minister Svetlana Nikitina. 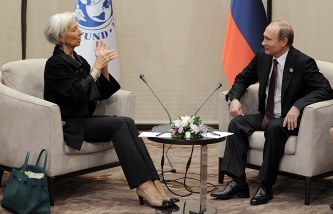 “Until the issue is resolved conceptually, we are still awaiting repayment of debt”, she said.

Speaking about the negotiations with the IMF, Nikitin explained that the Finance Ministry is in contact with the Foundation and recently discussed with its representatives the status of the Ukrainian debt. The Fund in principle have been expressed that Russia needs the debt to restructure.

“At the same time, the IMF agreed with the status of the debt (of Ukraine). We repeat that it is sovereign debt, and it can not be treated on par with commercial. In addition, the IMF is an international organization, which actually creates the program of financial assistance to Ukraine, and that the debt problem can only be solved in frames of this programme, because we know that Ukraine has sources to repay debt, probably not. Therefore, we expect a response from the IMF,” she said.

The best conditions, as requested by the IMF

As previously reported, the Russian President Vladimir Putin at the G20 summit in Turkey, said that Russia has offered to the over payment on the debt of Ukraine for the years 2016-2018 $1 billion a year. The head of state emphasized that Russia not only agreed to restructure the Ukrainian debt, and offered the best conditions, as requested by the IMF.

Later, the Minister of Finance of the Russian Federation Anton Siluanov said that Russia is ready to go for restructuring of the debt of Ukraine guaranteed by “the U.S. or the European Union or a major Bank in consultation with the Russian Federation”. He also indicated that the Russian proposal would “not create a precedent” to change the IMF’s policy in respect of lending to countries with overdue official debts.