UN, November 21. /Corr. Oleg Zelenin/. Russia will seek the early adoption of the UN Security Council its draft resolution on the fight against terrorism, despite the adoption of the French document. This was stated on Friday by the permanent representative of the Russian Federation at the world organization Vitaly Churkin. 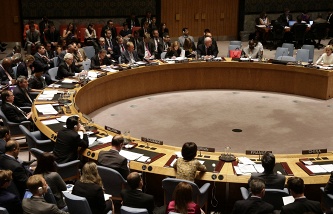 He called “politically short-sighted” attempt “some Council members” to block the work on the document. “Not one hand to fight terrorists, and the other, in fact, to play along with them, guided by considerations of the moment. Active work on the harmonization of our project we intend to continue with a view to its early adoption,” the diplomat said.

Russia presented the resolution on coordination of actions in combating terrorist organizations in late September. The document did not suit a number of Western countries, as urged to coordinate anti-terrorist efforts with the authorities of countries on whose territory military operations are conducted.

On 18 November, the Russian Federation submitted a revised draft resolution. As stated earlier, Vitaly Churkin, it is “a clearly defined concept of self-defence and article 51” of the UN Charter.

Earlier it was reported that the UN security Council resolution on the fight against “Islamic state” in Iraq and Syria, made by France. The Security Council called upon the member countries of the world organization to take all necessary measures in accordance with international law, to combat terrorist organizations in Iraq and Syria, as well as to eliminate a sanctuary for extremists in the two countries.

Following the vote, Churkin said that Russia could not support the document. “Although this project has been prepared in an unusual mode, in a short time, the French delegation consider very important amendments introduced by the Russian Federation”, – said the diplomat. He said that the resolution contains reference to the fact that “the main Foundation of the international fight against terrorism must be the UN Charter, regulating, in particular, the use of force”. In addition, in the preamble text at the insistence of the Russian delegation is now clearly stated that the instruments adopted at the international meeting on Syria on 30 October and 14 November, “are “service” on the basis of which, along with the Geneva communiqué of 2012, will promote the settlement of the Syrian crisis”.