The meeting of the Prime Ministers of Russia and Malaysia took place on the sidelines of the ASEAN activities. In the presence of Prime Ministers signed an intergovernmental agreement to establish a bilateral Commission on economic, scientific-technical and cultural cooperation. 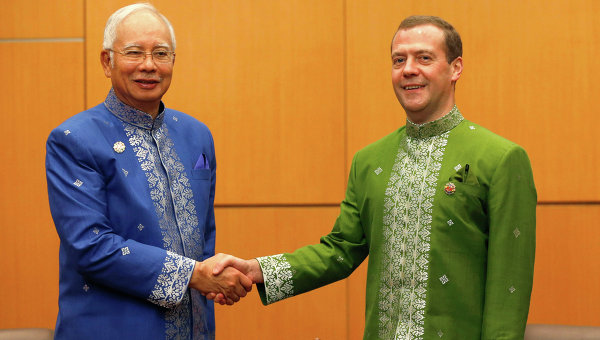 KUALA LUMPUR, 21 Nov. Prime Minister Najib Razak sees great potential in the development of bilateral relations with Russia in the field of defence and space.

Prime Minister Dmitry Medvedev meets with Malaysian counterpart on Saturday in Kuala Lumpur on the sidelines of the ASEAN activities.

Razak said “good and stable” relations with Russia, especially in areas such as defense and space, and emphasized that he sees “great potential” for development.

“We see the future to include new areas, such as education and science, calculated to Russian technologies in the field of space exploration,” said the Prime Minister of Malaysia, starting a conversation.

At the end of the conversation the Prime Ministers of Russia and Malaysia in their presence it was signed an intergovernmental agreement to establish a joint bilateral Commission on economic, scientific-technical and cultural cooperation.

Medvedev has thanked Razak for the wonderful reception. The participants of the East Asia summit, on which there arrived the head of the government of the Russian Federation, before the start of official events dressed in the national shirt of the Malaysian baju. Medvedev came to him at a meeting with Razak, praised the outfit for the convenience.

The Russian Prime Minister joked that the shirt easier to negotiate than in ties. “Here, I think, not to accept such form of clothing for official purposes,” he said with a smile.

In Kuala Lumpur these days is 35-degree heat, Sunny weather interspersed with showers.