MOSCOW, November 20. The state Duma adopted an appeal to the Montenegrin Assembly, parliaments of NATO countries and OSCE PA with an appeal not to involve Montenegro in the Alliance. 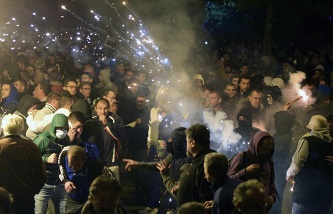 The Russian foreign Ministry: the true cause of the protests in Montenegro by ignoring the views of the public

“State Duma deputies appeal to my colleagues – deputies of the Assembly of Montenegro, parliamentarians of member States of NATO and the MPs within the Parliamentary Assembly of the OSCE, urging to refrain from expanding NATO, which, according to media reports, is planned to be implemented after stated at the beginning of December 2015, the official invitations to join the Alliance of Montenegro”, reads the document prepared by the Duma Committee on international Affairs.

Deputies with the assurance of respect for the sovereign right of each state to ensure the safety of its citizens, intend, however, to indicate that the “cluster approach, the involvement of new States, especially against the will of their peoples, military alliances are political tools of the “cold war”. “The desire of the regime of Milo đukanović, Montenegro’s ruling for 25 years, to join NATO against the will of the vast majority of the people of this country”, – underlined in the text of the appeal.

The document notes that “the Montenegrin authorities strongly deviate from the holding of a referendum on the issue of Euro-Atlantic prospects of the country, afraid to hear the voice of the people”. “Considerable sums are invested in rabid Pro-NATO propaganda and the falsification of the results of public opinion polls,” say MPs.

In this context, the state Duma expressed the hope that “when the issue of joining NATO both in Podgorica and in Brussels, common sense will prevail, the desire for broader engagement outside the blocks and dividing lines for the prosperity and security of people in the space from Vancouver to Vladivostok”.