TEHRAN/MOSCOW, November 23. The President of Russia Vladimir Putin will hold in Tehran a number of bilateral meetings, including with President of the Islamic Republic of Iran Hassan Rouhani and the Supreme leader of Iran Ayatollah Ali Khamenei. The talks will be held on the sidelines of the summit of the Forum of gas exporting countries (GECF). 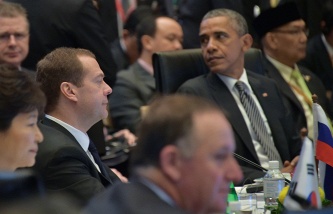 Medvedev: fight against terrorism must work together, not dividing allies into friends and foes

The Russian President will also meet with President of Turkmenistan Gurbanguly Berdimuhamedov and possibly with other leaders participating in the summit.

The previous and only time the President of Russia was in Iran in 2007.

The agenda of the talks with Iran

As reported to journalists by the assistant to the President of the Russian Federation Yuri Ushakov, it will be already the third meeting between Putin and Rouhani this year. With Khamenei, the Russian leader met only once – eight years ago at the Caspian summit in Tehran.

Conversation of the Russian President with the Ayatollah will be held in the afternoon – before the meeting of heads of state and government of the GECF. Talks with the President of Iran is scheduled for the evening – at first in narrow format and then with the participation of delegations.

According to Ushakov, considerable attention at the talks with the Iranian leadership will be paid to topical international problems, “the settlement of the conflict in Syria, the implementation of the Joint comprehensive plan of action regarding Iran’s nuclear program, combat terrorism, in particular – the counter (banned in the Russian Federation as terrorist) group “Islamic state”.

In addition, “it is expected that the interviews will be held an exchange of views on a whole range of issues of bilateral cooperation and trade-investment cooperation, nuclear energy, oil and gas, military-technical cooperation,” said assistant to the President of the Russian Federation.

In the Kremlin emphasize that “Russian-Iranian relations are traditionally based on the principles of friendship and mutual understanding, and trust are multifaceted in nature”.

During Putin’s visit to Tehran is planned the signing or initialling of a number of agreements between Russia and Iran – in particular, on the simplification of mutual trips of separate categories of citizens. In addition, said the aide, prepares a number of corporate agreements.

According to Ushakov, Putin’s bilateral talks in Tehran will be attended by the head of “Rosneft” Igor Sechin and the head of “Gazprom” Alexey Miller.

A meeting with the head of Turkmenistan and other contacts

At the meeting the Russian leader with the President of Turkmenistan invited to the summit as a special guest, will discuss “current issues of cooperation,” Ushakov said. In particular, he noted, there is an opportunity thoroughly to discuss cooperation in energy and other topics.

The summit will be attended by the presidents of Bolivia, Venezuela, Nigeria, Equatorial Guinea and the Prime Minister of Algeria. The other member States of the GECF will be presented in Tehran at the level of the energy sector.

Ushakov did not rule out that on the sidelines of a gas summit Putin, in addition to scheduled contacts, and can chat with other leaders.

“There are appointment requests, particularly from the President of Bolivia, Evo Morales, Venezuelan President Nicolas Maduro. We will look how to lay out the agenda of this event and, accordingly, will try to find the “window” for these and possibly other contacts, including short contacts “on the ground”, – said the representative of the Kremlin.

The forum of gas exporting countries held in Tehran on 21-23 November. The theme of the summit: “Natural gas is the best fuel for sustainable growth”.