MOSCOW, November 23.The President of the Russian Federation Vladimir Putin sent a telegram to the President-elect of the Republic of Argentina Mauricio Macri with congratulations on the victory in the presidential election. 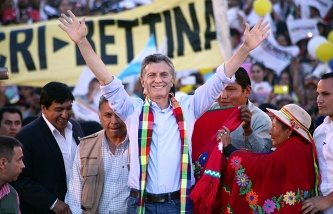 In a congratulatory telegram the Russian President noted the high level of Russian-Argentine dialogue. Putin stressed that Russia and Argentina, recently celebrated the 130th anniversary of the establishment of diplomatic relations, took a course on the development of a comprehensive strategic partnership, the press service of the Kremlin.

In particular, the planned implementation of major joint projects in the spheres of hydro energy, peaceful nuclear energy, oil and gas production, a good return gives the interaction of our countries in the United Nations, the Group of twenty and other multilateral organisations.

The Russian head of state expressed hope for active joint work to further build constructive bilateral cooperation in various fields and coordination in addressing the pressing issues of the international agenda that serves the fundamental interests of the friendly peoples of Russia and Argentina and is in line with ensuring stability and security in Latin America and around the world.