The tradition of preserving the historical heritage of presidents originated in the U.S. in 1939 after the decision of the 32nd President Franklin Roosevelt to donate to the Federal government all of their personal belongings and official papers for the organization of the historical archive.

The artifacts of the Museum

Among the unique artifacts of the Museum is a facsimile of the letter Boris Yeltsin Mikhail Gorbachev with notes and corrections, in which he criticizes the party bureaucracy.

According to the Deputy Executive Director of the Presidential center B. N. Yeltsin Lyudmila Telen, Fax a copy of the letter presented for the first time in the Museum. “This letter was first published in the biography of Yeltsin “Confessions on a given topic”. Much later in the archives Yeltsin was found a facsimile copy of this letter with notes and corrections,” said she.

The Museum also stores the tricolor raised over the Kremlin on 25 December 1991, the nuclear suitcase, which Yeltsin gave Vladimir Putin on 31 December 1999. “But the most surprising exhibit of the Museum – Cabinet of the first President of Russia, which moved from the 14th corps of the Kremlin in the Museum space”, – told organizers. In the study preserved the table on which lay a folder marked “Secret” and summaries of the Agency “ITAR-TASS” reports for December 31, 1999.

The size of the Presidential center is 22 thousand square meters, there are educational and children’s centres, gallery, meeting room, Museum, archive and library. 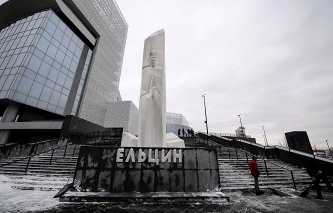 The core of the “Yeltsin centre” is a Museum of the first President of Russia. The exhibition opens with “the Labyrinth of history”, which introduces visitors to the social and political context of the twentieth century. The route that should be passed to the guests, is through a chain of chambers, each of which is associated with one or another turning point in the country’s history – the coup of 1991, economic reform of 1992, October 1993, elections, the war in Chechnya. Seven turning points, seven days in recent history. According to the head of the archive of the Presidential center B. N. Yeltsin Dmitry Pushkina, the author of the artistic concept was Pavel Lungin (Russian film Director – ed.). “Each day is a decision, or some challenge, response. The contrast between what was and became. And here are the seven key decisions, each of which will last for a political biography of any politician, formed the basis of our the main composition”, – said Pushkin.

The history of creation

“Yeltsin centre” established under the Federal law “On centers of historical heritage of presidents of the Russian Federation who have stopped execution of powers”, which was adopted in 2008. According to Lyudmila, teleni on its funding from the Federal budget allocated 2 billion roubles for the purchase of the building in Ekaterinburg, and another 3 billion rubles for its construction.

“Besides, we got 2 billion commercial credit from the Ministry for state property management of the Sverdlovsk region (MUGISA). This is a refundable credit, which we pay a percent,” she said. According to her, “Yeltsin Centre” and used the sponsorship money, the amount of which is not disclosed on the wishes of the donators. “Some of the areas that are adjacent to the center will be rented out. Money Center will go to its development”, – said the Agency interlocutor.

In an open tender for the design involved 20 companies. Russia was represented by the Studio of Artemiy Lebedev. The centre is made in the concept, which was developed by Russian historians, archivists, journalists and writers. The competition was won by the US company Ralph Appelbaum Associates Incorpоrated, which had previously developed the project of the Jewish Museum and tolerance Center in Moscow.

When assigned to work in the capital, Yeltsin headed the construction Department of the CPSU Central Committee, became Secretary of the Central Committee, then first Secretary of Moscow city party Committee. In 1987 Yeltsin has been displaced from their positions and returned to politics only in March 1989. Then, gaining more than 80 percent of the vote in the first democratic elections in the country’s history, Yeltsin became the people’s Deputy of the USSR. In 1990 he was first elected on an alternative basis by the Chairman of the Supreme Soviet of the RSFSR. In the same year, announced its withdrawal from the CPSU. On 12 June 1991 by popular vote elected the first President of the Russian Federation, received in the first round more than 50 percent of the vote. 3 July 1996 Boris Yeltsin was re-elected to the presidency, having received second round support for nearly 54% of voters. Yeltsin on 31 December 1999 announced the resignation, early folding of the powers, and finally retired from politics. Died 23 April 2007.