TEHRAN, November 23. Russia and Iran intend to increase the momentum of trade relations, paying attention to diversification of the commodity nomenclature, greater use of the national currency in mutual settlements. This was stated by the President of the Russian Federation Vladimir Putin to journalists in Tehran. 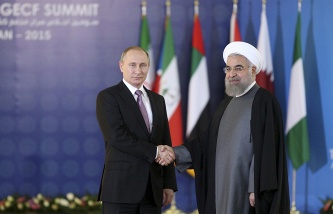 Putin: Russia and Iran intend to strengthen cooperation in the fight against terrorism

“We intend to build on the momentum of our bilateral ties. Will pay attention to the diversification of the commodity nomenclature, greater use of national currencies in mutual settlements,” said the President of the Russian Federation.

He also said that the parties will intensify and industrial cooperation. “Russia is ready to provide state export credit in the amount of $5 billion,” Putin said. He added that for joint cooperation selected 35 priority projects in energy, construction, marine terminals, Railways, etc.

The Russian leader also noted that the EEU will start in applied to the key study question of an FTA with Iran.

“The Eurasian economic Union will start in applied key study possibilities for the establishment of a free trade zone with Iran,” said Putin.

The Russian Federation will help to convert nuclear production to Iran 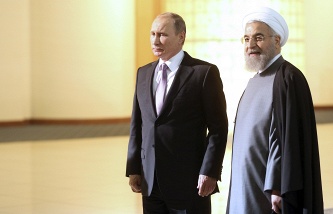 Putin and Rouhani have started negotiations at the highest level

Putin also said that Russia will help Iran to repurpose its nuclear production to manufacture products for scientific purposes. “We will provide maximum assistance to implement the corresponding plan of action in the framework of the Iranian nuclear program, approved in July by the UN security Council, he said. – Including will assist in the processing of enriched uranium and the conversion of production to production of stable isotopes for research purposes”.

“We will continue mutually beneficial cooperation in nuclear energy”, – said the head of state. He recalled that the first unit of the Bushehr NPP have already reached full capacity, also started work on the construction of 2 and 3 blocks.

The Russian President also congratulated Iran on the successful holding of the forum of gas exporting countries. Telling journalists about the results of today’s work in Tehran, the Russian President many times called the Iranian leadership “friends and partners” of Russia.

“I would like to congratulate our friends on the successful holding of this major international event (Forum of exporting countries) gas”, – said Putin. He confirmed that “Russia intends to increase gas production by 2035 by 40%”.

The Russian President also thanked “the Iranian partners and friends for the invitation, Mr. President – because he was invited to the event, for the warm atmosphere that was created during the joint work”.