SOCHI, November 24. The attack of the Turkish air force Russian su-24 aircraft which took part in anti-terrorist operations in Syria and did not pose a threat to Turkey, is a “stab in the back” of Russia. Following Ankara’s actions look like an attempt to put NATO in the service of the “Islamic state” (IG, is prohibited in the Russian Federation terrorist group). This was stated by the President of Russia Vladimir Putin at a meeting with Jordan’s king Abdullah II, commenting on the crash of a Russian su-24 bomber in Syria.

Su-24 does not pose a threat to Turkey

Putin stressed that the Russian bomber was shot down by a missile “air-air” with a Turkish F-16 aircraft over the territory of Syria, when he was at the height of 6 thousand meters at the distance of one kilometer from the Turkish border. He fell 4 km from the border in Syria. 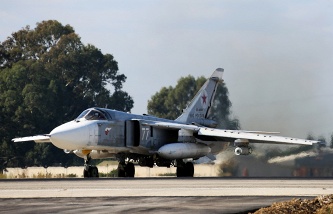 “In any case, our pilots, our aircraft in no way threatened the Republic of Turkey. This is an obvious thing. They have conducted operations against ISIS (“Islamic state of Iraq and the Levant” – the former name of ISIS),” said Putin.

The President noted that the Russian bomber had acted in a mountainous part of Northern Latakia, “where fighters – in the main, natives of the Russian Federation”. “And in this sense they (the pilots) perform its direct problem – preventive strikes on terrorists at any moment, at any time could return to Russia”, – said the President, explaining that we are talking about the representatives of international terrorism.

A stab in the back from supporters of terrorists

Putin has explicitly stated that such actions Turkey can be regarded as aiding the extremists. “Today’s loss is connected with the blow that struck us in the back accomplices of the terrorists. Otherwise I can’t qualify what happened today”, he said. 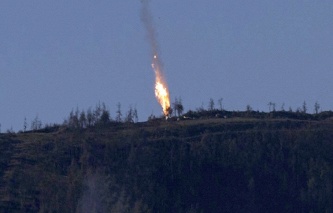 “Of course, we carefully analyze what happened, and today’s tragic event would have serious consequences for Russian-Turkish relations,” Putin said. He stressed that Russia has always treated Turkey not just as a close neighbor, but as a friendly state.

“I don’t know who needed what done today; at least not for us”, he concluded.

Putin also noted that Moscow has long recorded the fact that “Turkey is a large amount of oil and oil products with ISIS occupied territories”. According to him, hence there was “big money fueling gangs”.

“Now strike us in the back, shot on our aircraft that are fighting against terrorism,” Mr Putin said. According to him, the attack of Turkey on the Russian su-24 happened despite the fact that “we with the American partners signed the agreement on prevention of incidents in the air, and Turkey, as you know, among those who have announced that they are supposedly fighting terrorism as part of the American coalition.”

“If they, ISIS is the money – and the account goes on tens, hundreds of millions, maybe billions of dollars – by trading oil, plus they have the protection of armed forces of entire Nations, then it is clear why they behave so boldly and blatantly, why do they kill people in the most horrific ways, why they are committing terrorist acts worldwide, including in the heart of Europe”, – concluded Putin.

NATO in the service of terrorists

The Russian leader said that after the incident with the bomber “instead of immediately with us to establish the desired contact, as far as we know, the Turkish side appealed to its NATO partners to discuss this issue.” “It’s as if we shot down a Turkish plane and not they ours,” asks Putin. 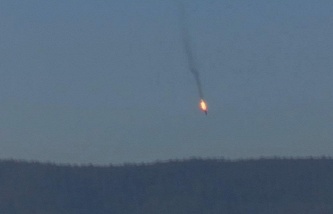 “They want to put NATO in the service of ISIS?” – said the Russian President.

“I understand that each state has its own regional interests, and we always treat them with respect. But we will never tolerate, to such crimes as it is today,” said the Russian leader.

He expressed the hope that “the international community still find the strength to unite in the fight against this common threat (of terrorism)”. “In this regard, of course, are counting on very active participation of all countries in the region in this struggle”, – concluded the President of the Russian Federation.

According to him, Russia will continue including working with intelligence agencies and the military in Jordan and other countries.