The Bank of Russia withdrew the license at Svyaznoy Bank, by total assets on November 1, 2015 took the 150-th place in the banking system of the country. Care Liaison officer of the Bank from the market was expected, experts stated. 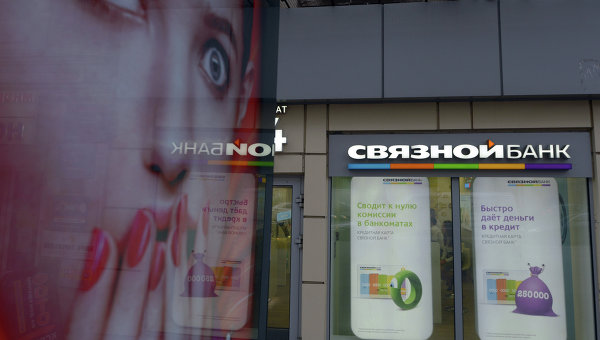 MOSCOW, 24 Nov. The Bank of Russia on Tuesday revoked the license of Svyaznoy Bank, thereby putting an end to the history of his resuscitation. The financial health of the Bank, lost their capital and have violated the basic standards, it was impossible due to the low quality of assets, explained the regulator. Care Liaison officer of the Bank from the market was expected, experts stated.

According to the Central Bank, by total assets Svyaznoy Bank on November 1, 2015 took the 150-th place in the banking system of the country. The portfolio of deposits from the Bank on 1 October, according to “RIA Rating”, amounted to 13.7 billion rubles.

“Svyaznoy Bank had committed violations of banking legislation and Bank of Russia regulations in part underestimation of credit risk. As a result of forming reserves, adequate to the accepted risks, the credit organization completely lost own means (capital)”, — stated in the message of the Central Bank.

Due to the low quality of assets, the procedure of financial recovery of the Bank with the involvement of the Agency for Deposit insurance (DIA) on reasonable economic terms was not possible, noted the regulator.

Earlier official representative of Svyaznoy Bank reported that a credit institution has notified the Central Bank in early October that the values of the ratios were below the critical level.

There was not found an investor

Svyaznoy Bank could have been saved if he found an investor, said on Tuesday first Deputy Chairman of the Central Bank Alexey Simanovsky.
“Were, actually, some hope that the mostly market methods will be able to restore the activity of the Bank. Hopes were dashed, because no one was interested parties and investors who would want to “invest” and to raise the activity of this Bank”, — said Simanovsky.
According to him, the “hole” in the Bank’s capital was small, associated with its retail portfolio. Effect of deteriorating circumstances, and in view of the impossibility of attracting new loans, because of the limitations of the Central Bank, the Bank started to “deflate”, said first Deputy Chairman of the Central Bank.

“If there was a new effective owner, would then have the ability to restore the activity of the Bank”, — he concluded.

The story of the fall of the Coherent

Svyaznoy Bank was established in 2010 as a result of the partnership Promtorgbank and the group of companies “Svyaznoy”, specializing in the sale of personal communications equipment and other key services.

Problems at the Bank began about a year ago, when the founder of the group of companies “Svyaznoy” Maxim Nogotkov has received a notice of default on the debt, the collateral for which was made by the controlling group. Contributors from that moment began EN masse to withdraw money from the Bank.

Until November 2014 the main shareholder of Svyaznoy Bank was Nails. In mid-November, “ONEXIM” and NPF “Blagosostoyanie” received 90% of the shares of Svyaznoy group because of her debts.

In December, the company North Financial Overseas Corp. (NFOC), a division of group Solvers Oleg Malis, bought from “ONEKSIM” and “Welfare” rights of claim for the overdue loan, “Coherent”, the key on which the shares of the Cypriot company Trellas. Through her Marigolds controlled assets the group of companies “Svyaznoy”.

Later Solvers and received operational control over Trellas. The Coherent control of the Bank passed to Malis only at the end of April 2015.

The management of the Bank until the last moment sought the Bank rehabilitation to avoid revocation of the license, but was unable to find it. One time readjustment “Liaison” was interested in “the Renaissance the Credit” of Mikhail Prokhorov, but he later refused to buy. According to media reports, the possibility of rehabilitation of credit organizations studied Expobank and Finprombank.

“Svyaznoy Bank for almost a year is in a state of “neither alive nor dead,” that is kind of a zombie Bank. Sadly, but without it the Russian banking system will be fine, although lost a bright player,” — said the head of analysis of financial institutions by the rating Agency “RIA Rating” Andrey Manko.

The Central Bank has long sought opportunities to reorganize the Bank and, apparently, not found, summarizes Manko.

The lack of desire among investors in rehabilitation of Svyaznoy Bank caused by the complete collapse of unsecured retail lending, on which he specialized. “The market of unsecured loans is declining rapidly, so the market niche is already Connected there is virtually no”, — the expert believes.

The condition of the Bank was poor to cope with their problems, he could not, continues the head of Department of “RIA Rating”. “Historical Nogotkov main shareholder in crisis over money, the new controlling shareholder of Malis, apparently, did not want to “invest” in this asset”, — he concluded.