The volume of commissioned housing in 2015, in the Tula region reached a record over the past 25 years, accounting for 10 months of more than 640 thousand square meters, exceeding the same period of the previous year of 164%, specify in the Ministry of construction and housing and communal services of the Tula region. 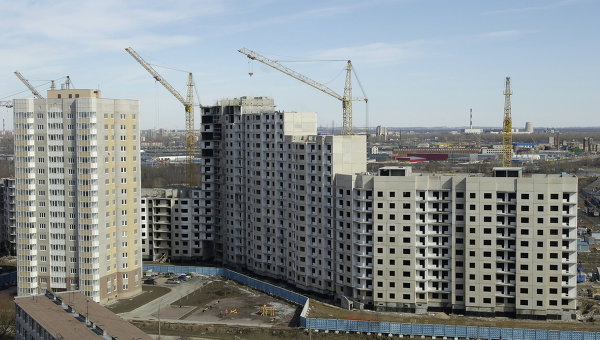 MOSCOW, November 24. The volume of commissioned housing in 2015, in the Tula region reached a record over the past 25 years, accounting for 10 months of more than 640 thousand square meters, exceeding the same period of the previous year of 164%, specify in the Ministry of construction and housing and communal services of the Tula region.

“Such a downturn in residential construction has resulted in high housing prices at a low purchasing power of the population in the absence of support measures for mortgage lending,” — said the Minister of construction and housing and communal services of the Tula region Eleanor Shevchenko.

Thanks to the measures taken by the government of the Tula region, for the last four years in the region have significantly increased housing construction.

In just 4 years entered 1.6 million square meters of housing. For this indicator, the Tula region is on the 6th place in the Central Federal district (CFD) and the 32nd place in Russia, specify in the construction field.

And for 10 months of the current year, the Ministry informs, the amount entered in the Tula area of housing reached a record over the past 25 years — more than 640 thousand square meters. Compared to the same period last year the growth rate was 164%.

According to Yudin, the Foundation of mortgage lending in 2015 has increased the number of issued mortgage loans to purchase housing on the primary market by more than 2.5 times compared to 2014.

However, the total volume issued by the regional Fund of mortgage lending loans in region as of 19 November with the beginning of the year amounted to $ 370,8 million, which is 38.5% lower against the same period of 2014, says the expert.

Overall volume of mortgages granted in the region since the beginning of the year as at 1 September amounted to 6.05 billion, which is 38.4% lower against the same period of 2014, the data leads the Agency interlocutor.

To ensure the availability of housing in the Tula region the regional government has taken measures aimed at formation of effective demand for housing, including through mortgage lending.

Thus, in the framework of the program “Providing with qualitative housing and services of housing and communal services of the population of the Tula region” is implemented by several subroutines. In particular, according to the Ministry of construction in the region, for co-financing of the subprogramme “Providing young families with housing in the Tula region” for the period from 2011 attracted more than 320 million roubles from the Federal budget and more than 610 million from the regional budget. This allowed to improve the living conditions of more than 1,5 thousand young families.

Also in the region, there is a subprogram “Development of mortgage housing crediting in the Tula area”. She realised at the expense of the regional budget and is a one-time social payments to purchase housing in the form of down payment to certain categories of citizens, noted in the Department. For the period from 2011 on the implementation of this program was allocated to 1,167 billion roubles. This funding will improve the living conditions of more than 800 families. In 2015 it is 175 families, including 21 large family, 12 families of public sector employees, 142 households living in unsuitable housing, Ministry of construction show in the region.

In addition to the subprogramme in the Tula region has implemented the program of preferential mortgage lending for specialists of health care institutions, state and municipal employees, teachers, families with two or more children. This program is “Your home” (on construction of individual houses) and Affordable housing (the acquisition of an apartment in an apartment building) with the rates on mortgage loan 7% and 11%, respectively.

The elimination of “gang”

One of the priority directions of housing policy of the Tula region is the elimination of dilapidated housing stock.

“The region has registered more than 2 million square meters of dilapidated housing, which is 5% of the total housing stock in the region (40.5 million square meters), with a similar figure for the Central Federal district — 1.8% and 3% — on Russia,” — noted in the Ministry of construction of the Tula region. A large portion of emergency housing is unpromising mining towns, transferred into municipal ownership for mine closure.

With the financial support of Fund of assistance to reforming of housing and communal services in the period until 1 September 2017 in the Tula region will be settled more than 321 thousand square meters of dilapidated housing, resettled more than 16.5 thousand people. For this indicator, Tulskaya oblast takes the 1st place in CFD and 7th place in Russia, noted in the Department. Since the beginning of implementation of the program of resettlement of citizens from emergency housing settled 98,65 thousand square meters, resettled 5.3 thousand inhabitants.