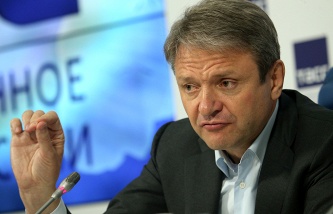 Kostin: the incident with the Russian su-24 will have a negative impact on relations between Russia and Turkey

The U.S. armed forces: C-400 will not prevent the U.S. air force to continue operation in Syria

“Militarily we certainly do not intend to declare war on Turkey, but further operations of the Russian air force in Syria will be more protected”, – said Chizhov.

According to him, the attack of the Turkish air force Russian su-24 was pre-planned. The incident “will have a negative impact” on Russian-Turkish relations, Chizhov warned.

Russia’s permanent representative to the EU also commented on the recommendation of the head of the Russian foreign Ministry to Russians to refrain from trips to Turkey: “This warning is dictated primarily by concern for Russian citizens”.

A fighter from the Turkish air force F-16 on Tuesday shot down a Russian bomber su-24M, which, according to Ankara, had violated the country’s airspace near the border with Syria. The defense Ministry claims that the su-24M was extremely over Syrian territory and that “violations of the airspace of Turkey.” Russian President Vladimir Putin warned that the attack on the bomber would have “serious consequences” for Russian-Turkish relations. According to the head of state, the Turkish air force attack on the Russian plane, which was involved in anti-terrorist operations in Syria and did not pose a threat to Turkey, is a “stab in the back” of Russia.