MOSCOW, November 26. More than 200 million ballot papers will be printed in the election of deputies of the state Duma of the seventh convocation, which will be held September 18, 2016. This was announced on Thursday, the Chairman of the CEC of Russia Vladimir Churov.

“This year (for regional elections – ed.) it was printed 66 million ballots, of which about 9 million in national languages. In 2016 it will print 200 million ballot papers, respectively, will increase in proportion to the number of ballots in the national languages”, – he said at a meeting of the Public scientific and methodological Advisory Council under the CEC of Russia. 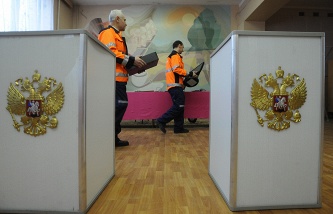 The supervisor expects provocations in the elections 2015-2016

The Chairman of the CEC also said that he expects that the state Duma elections in 2016 will work about 240 thousand Russian observers.

“Practice shows that in 2016 domestic observers will be two times more (than the regional elections of 2015 – approx.). About 240 thousand domestic observers be,” he said at a meeting of the Public scientific and methodological Advisory Council under the CEC of Russia.

Churov added that the CEC is expecting to start negotiations at the invitation of international observers.

“The question is, who and how many to invite, because it is clear that the institution of international observation is 90% politics and 10% objectivity”, – he said.

Duma elections will be held under a mixed system – 225 deputies elected on party lists and 225 – on one-mandatory districts.