MOSCOW, November 26. Net profit of PJSC TransContainer according to international financial reporting standards (IFRS) for 9 months of 2015 decreased by 41.7% to 1 billion 925 million roubles. This is stated in the message of the company. 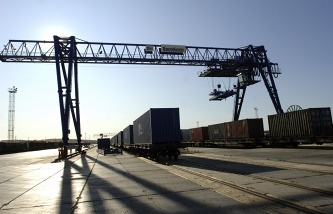 Revenue in TransContainer in accordance with IFRS for the reporting period amounted to 31 billion rubles, which is 15.1% higher than the same period last year. However, the revenue, adjusted for the cost of services of subcontractors decreased by 1.7% and amounted to 15 billion 153 million.

The company’s assets as at 30 September 2015 $ 48 billion roubles and its capital is 35 billion 626 million roubles. Net debt (net of cash and cash equivalents and short-term investments) amounted to 3 billion 32 million rubles, which is 37.7% below the level of the end of last year.

According to the report, in the third quarter of 2015, the company provided improvement in all key financial indicators compared with the previous quarter. Thus, quarterly revenue under IFRS increased by 11.6% compared to the second quarter of 2015 and $ 11 billion 059 million rubles; EBITDA increased by 57% to the previous quarter and amounted to 1 bln 856 mln, net profit increased 2.5 times to reach 886 million.

In addition to seasonality, the dynamics of financial indicators “the TransContainer” in the third quarter the positive impact of flexible pricing policy, as well as measures to reduce expenses: operating expenses excluding services of subcontractors decreased by 4.5% compared to the previous quarter.

PJSC “TransContainer” operates over 27 thousand of fitting platforms, over 64 thousand containers and cargo owns 46 terminals located throughout the railway network of Russia, manages a container terminal on the border of Slovakia and Ukraine, and controls 50% of the largest container operator of Kazakhstan JSC “Kedentransservice”.

“Russian Railways” owns 50% plus two shares in TransContainer (the company contributed a package to the United transport and logistic company), FESCO transportation group – 24.1 per cent, the European Bank for reconstruction and development – 9.25% p, structures NPF “Welfare” – 10,29%.