MOSCOW, November 26. The Chairman of the Duma Committee on international Affairs Alexei Pushkov said that he intends to remain working in the lower house after the presidential decree banning parliamentarians and members of the Public chamber of the Russian Federation to enter the presidential Council for civil society development and human rights (SPCH). At the same time, the politician explained that the post in the state Duma gives it a very wide opportunities for human rights activities, especially in international venues. 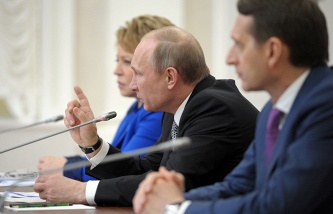 “As for me, because of the significant responsibilities entrusted to me as head of the Committee, the obligations I have, I intend to remain in the state Duma 6-th convocation and thus to cease operations in the HRC,” he said.

Pushkov, part of HRC for 10 years, also agreed that “Council members should not disperse its efforts on several fronts and needs to focus on social and political work as its primary function”. He confirmed that the work in the state Duma leaves much less time for the member of the HRC to engage directly in human rights activities.

The MP is convinced that “one of the most important tasks of the Council is not only in the development of the institution of civil society and protection of human rights in Russia, but also abroad”. Without this the Council’s activities is not complete, he said. Pushkov noted that as the Chairman of the Russian delegation to PACE and member of the delegation to the OSCE PA, he received “a very serious additional opportunities for human rights work, particularly in regard to protecting the rights of compatriots abroad and in asserting some principle to state positions”. “In particular, at the PACE we paid great attention to criticism of the Institute of non-citizens in the Baltic States, have made efforts to ensure that this institution were amended accordingly”, – he reminded.

Russian parliamentarians have repeatedly spoken about the need to protect human rights in Abkhazia and South Ossetia. “Together with delegates from other countries, we have proposed solutions in favour of Christian minorities in the middle East, made by the Greek delegation to PACE issued a joint statement on this issue”, – said the head of the Duma Committee.

“We certainly made every effort to ensure that the protection of human rights in Ukraine is not left out of sight and PACE, and the OSCE, because there’s every effort has been made to these issues was not discussed”, – said Pushkov. Thus, the Russian deputies were only at these sites, who put the question of the mass murder in Odessa on may 2, 2014. “We are much more skeptical attitude to the actions of Ukraine, which is now expanding in Europe, this is a consequence of including our work”, – concluded the MP.

“It really will be representatives of civil society”

The presidential decree banning parliamentarians and members of Public chamber (OP) the Russian Federation to enter the presidential Council for civil society development and human rights (HRC) raises the status of this organ. This opinion was expressed to journalists by the Deputy of the state Duma, member of the Board Mikhail Terentiev. “The decree allows to increase the status of the Council for human rights. It really will be representatives of civil society, which it is nowhere included in any other governmental structures”, – said the MP. According to him, the HRC becomes the “status of Council of public representatives”.

Speaking about the choice he must make between the state Duma and the HRC Terentyev (part of the faction “United Russia”) said that “I decided when I went to the Duma, which represents the collective interests of people with disabilities, trying to protect at the legislative level”. “Regardless of who will deal this issue in the Council on human rights, there are really competent people, I am definitely going to cooperate with them as in the position of state Duma Deputy and Chairman of the Russian public organization “all-Russian society of disabled people”, – he promised.

“Therefore, my activity will remain essentially unchanged,” said Terentyev. “Yes, of course, will have less opportunity to meet the President, to announce very important issues facing the disabled, but I think the constructive agenda, which recently promoted by the ministries, the President and the Prime Minister, she suggests that managers of large public organizations have many opportunities to Express their point of view to the state Duma and to the government and to work together with the political party “United Russia” the constructive proposals which arise and which need to be sustained”, he concluded.

“The limitation is reasonable and justified”

The Chairman of the Federation Council Committee on constitutional legislation and state construction Andrey Klishas believes necessary and reasonable prohibition on parliamentarians to join the presidential Council on human rights (HRC).

“Members of Parliament have their own Playground, and the highest level – the Federal Assembly and in the Council on human rights should include, primarily, representatives of civil society,” said the Senator. “The limitation is reasonable and justified”, he added.

The Russian President Vladimir Putin forbade the state Duma deputies and Federation Council members, and members of the Public chamber of the Russian Federation to be members of the presidential Council on civil society development and human rights (SPCH). The corresponding presidential decree published on the official portal of legal information.