MOSCOW, November 26. The President of Russia Vladimir Putin will meet on Thursday in the Kremlin with President of France Francois Hollande. 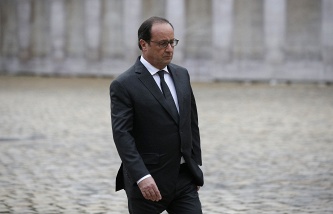 “During the talks the two leaders will discuss questions of counteraction to the terrorist threat, including coordination in the fight against grouping “Islamic state” and other important issues of the international agenda”, – reported in a press-service of the Kremlin.

They added that the meeting “will exchange views on the entire range of bilateral relations”.

Russian and French leaders agreed to this meeting on 17 November, after the terrorist attacks in Paris. During a telephone conversation, Putin and Hollande had “agreed, in particular, to ensure closer liaison and coordination between military and intelligence agencies of the two countries during operations against terrorist organizations, implemented by Russia and France in Syria,” reported the press service of the Kremlin. The presidents also “paid special attention to enhancing bilateral and multilateral cooperation to combat international terrorism” in connection with the barbaric terrorist act, the consequence of which was the crash of a Russian airliner in Egypt, and the tragic events in France, celebrated by the Kremlin.

On the same day, Putin instructed the Russian military to establish direct contact with French colleagues and work with them “as allies”, and to develop a plan of joint fight against terrorists in Syria.

Hollande, recognizing the need for international Union in the fight against terrorism, have already held talks with the leaders of Britain and Germany. November 24, he visited Washington where he met with U.S. President Barack Obama. After this conversation, the French leader said that his country will work together with Russia in Syria if Moscow will focus its efforts on the destruction of the group “Islamic state” (banned in Russia), as well as on the search for a political solution to the Syrian crisis.

“On Thursday I will go to Moscow to meet with Vladimir Putin. And I will tell him that France would work with Russia, if Russia would focus its military action against ISIL (formerly ISIS). And if Russia is committed to a political solution in Syria,” said Hollande. “This is what we want to do… Collect all the country, everyone who wants to find a political solution for Syria. We don’t want anyone excluded,” he added.