The President of Russia after talks with French President in the Kremlin have noticed that the fight against terrorism is a common problem and both countries are United in their intention to find and punish the criminals. 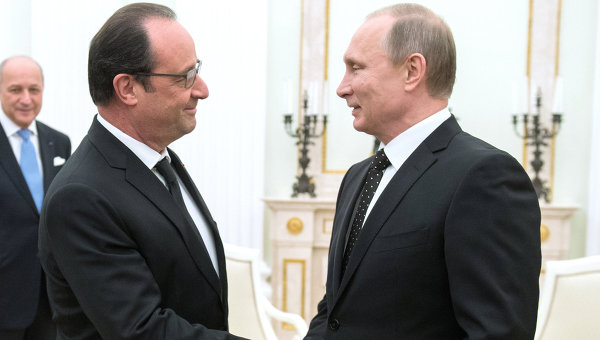 MOSCOW, Nov 27. The President of Russia Vladimir Putin after talks with French counterpart Francois Hollande said that the position of the countries converge in the intention to punish the perpetrators of terrorist acts against Russia and France.

“Naturally, utmost attention was paid to the issues of joint struggle against international terrorism. The barbaric attack on the Russian airliner in the skies over Sinai, the terrible events in Paris, terrorist attacks in Lebanon, Nigeria, Mali have led to mass deaths of people, including hundreds of citizens of Russia and France. This is our common tragedy. And we are United in our intention to find and punish the criminals,” said Putin after the meeting with President of France Francois Hollande.

France and Russia recently has suffered major terrorist attacks. The A321 aircraft to the Russian airline “Kogalymavia” carrying out flight 9268 Sharm El-Sheikh to St Petersburg, crashed on 31 October in the Sinai Peninsula. Killed all aboard: 217 passengers and seven crew members. The disaster became the largest for all history of Russian and Soviet aviation. The head of the defense Ministry Sergei Shoigu said that the terrorist attack on Board the A321 involved in the grouping “Vilayat-Sinai.”

The evening of November 13 in Paris has been a series of terrorist attacks. Unknown opened fire at one of the restaurants, three explosions were heard in the vicinity of the stadium “Stade de France”, where was held a friendly match the football teams of France and Germany, which was attended by French President Francois Hollande. In addition, at a rock concert at the “Bataclan”, the unknown took hostages. According to the latest figures, killed 130 people.