MOSCOW, November 26. The President of Russia Vladimir Putin said that the talks with French President Francois Hollande priority was given to joint the fight against terrorism. “Naturally, utmost attention was paid to the issues of joint struggle against international terrorism,” – said the Russian leader.

Putin stressed that the talks were substantive, they were in a trusting and constructive manner. 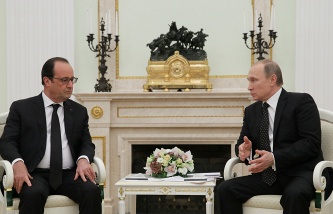 He also said that Russia and France are United in their intention to find and punish those involved in recent terrorist attacks against Russian aircraft and committed in Paris. “This is our common tragedy, we are United in our intention to find and punish the criminals,” said Putin. He recalled that as a result of these attacks killed hundreds of citizens of Russia and France.

The head of state noted that after these events the Russian Armed forces have intensified operation in Syria. “Our military actions are effective. The militants of the so-called “Islamic state” (IG, is prohibited in Russia) and other radical groups are a serious loss. Broken control system and the infrastructure of extremists, the President said. – Significantly undermined and financial base (terrorists). Primarily referring to the smuggling of oil, which brought the terrorists and their sponsors fabulous profits”.

“Russia and France know what the true spirit of Alliance”

He added that this will make the work of the two countries in the fight against terrorism more effective, “to avoid any blows to those areas and the armed groups who themselves have not shoot”.

“Mr Hollande considered this interaction as a concrete, practical contribution to the formation of a broad antiterrorist coalition of anti-terrorist front under the auspices of the UN. Note that the number of countries that share this initiative grows,” he said.

He also noted that “the eradication of terrorism in Syria will create the conditions necessary to achieve long-term settlement of the Syrian crisis”. He added that he and his French counterpart agreed to continue “most active work within the international support group in Syria, to facilitate the implementation of all agreements reached there, primarily with the terms and parameters of inter-Syrian negotiations”.

“We believe that it would be better to create a single General coalition and to coordinate activities in these circumstances, it would be simpler, easier and much more effective, said the President of Russia. But if our partners are not ready, well, we are ready to work in a different format – in this, which is acceptable for our partners”.

The French President, in turn, said that Vladimir Putin can count on the support of Paris after the terrorist attack with Russian A321 aircraft over the Sinai Peninsula.

“I thanked President Putin and the Russians for their expression of condolence, sympathy and friendship towards the French people (in connection with the terrorist attacks in Paris – approx.TASS). I once told Putin that he can count on my support after the attack on the Russian airliner,” – said Hollande. 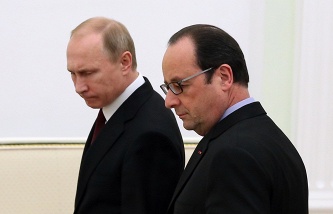 Hollande: Russia must play a major role in the political settlement in Syria

In addition, he noted that Paris did everything to the armed forces of France could effectively participate in the eradication of ISIS. Also Francois Hollande is sure that Russia and France in combating terrorism, must act together.

Beats Russia and France by the IG will be coordinated, stressed also French President.

François Hollande explained that the meeting in Moscow is to organize joint action against the terrorists. “We all suffer from terrorism, terrorism can strike anywhere in the world, he said. That was the point of our meeting in Moscow – we must work together”

Press conference of the presidents of Russia and France in the Kremlin. Text translation