The President of Russia Vladimir Putin met in the Kremlin with President of France Francois Hollande. During the talks, the two leaders discussed the issues of counteraction to terrorist threat, including coordination in the fight against terrorist group “Islamic state” (IG, is prohibited in Russia), as well as other topical issues of the international agenda. 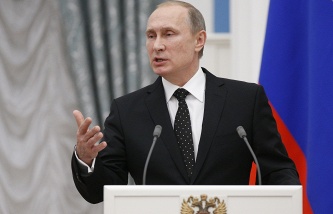 According to Putin, the terrorist attacks that happened in France, as well as with the Russian aircraft A321, forced to unite efforts of Moscow and Paris in the fight against terrorism. The President assured the French President: “We mourn with you about the losses that France has suffered a severe loss”.

Putin also said that Russia and France are United in their intention to find and punish those involved in recent terrorist attacks.

Russia and France know what the spirit of Alliance. It was not one time in our history. Today we agreed to strengthen our joint work on the antiterrorist track, to strengthen the exchange of information on terrorism, to establish constructive work of our military specialists, in order to avoid duplication and incidents

He added that this will make the work of the two countries in the fight against terrorism more effective, “to avoid any blows to those areas and the armed groups who themselves have not shoot”.