Development of the Mitsubishi Regional Jet, started seven years ago. The main advantage of the MRJ is its economy due to high technology and new materials it uses 20% less fuel than similar machines. 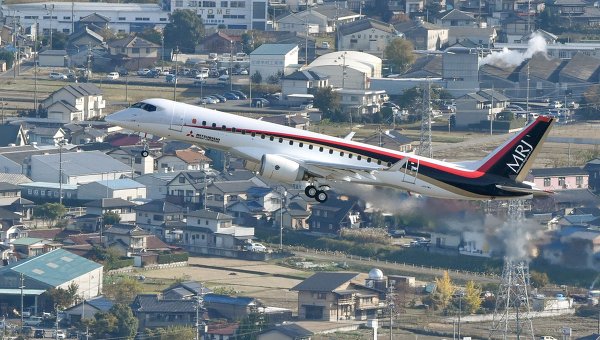 This is the third test flight of the aircraft, which became not only the first Japanese jet passenger plane, but the first more than half a century of passenger aircraft made in Japan. Its predecessor was the passenger turboprop YS11, was established in 1962.

Flight took place in good weather, as during the previous tests, but plans to conduct flight in bad weather. Until the spring of next year, test flights will take place in Japan, and then will begin testing on U.S. territory.

By the beginning of 2017 MRJ, you need to fly 2500 hours, to obtain a safety certificate from the Japanese Ministry of transport.

Japanese passenger jet MRJ (Mitsubishi Regional Jet) Mitsubishi Aircraft Corporation made its test flight hour on November 11. Development of the Mitsubishi Regional Jet, started seven years ago. According to the developers, MRJ has concentrated in itself all the best achievements of Japanese science and technology. The main advantage of the MRJ is its economy due to high-tech engine and a light fuselage and tail, created using ultra-strong carbon fibre, it uses 20% less fuel than its class brothers. The range is from 1.8 to 3.7 thousand kilometers, depending on the modification: MRJ70 76 and MRJ90 seats 88 seats. Its length is about half the size of a normal passenger jet with 35.8 meters.

To date, Mitsubishi Aircraft Corporation has received orders for 407 MRJ aircraft in various modifications. It is expected that customers will be able to get the plane in 2017.