MOSCOW, November 26.Russian President Vladimir Putin and French leader Francois Hollande held talks in Moscow. Discussed the response to the terrorist threat, including coordination in the fight against terrorist group “Islamic state” (IG, is prohibited in Russia). After the meeting held a press-the approach of heads of state.

Press-the presidents of Russia and France in the Kremlin. Text translation

Russia has not deployed air defenses in Syria, as it did not expect the attack on their aircraft by Turkey, said Vladimir Putin.

Putin ruled that Turkey failed to identify the Russian plane, calling it “excuses”.

We believe that the current coalition, Turkey is a member of this coalition and should know that works there is Russian aviation. What else? What if they learned that it was an American plane, would hurt the U.S.? It’s all nonsense. These excuses

In addition, Putin said that Russia will hold “serious consultations” with the U.S. about how they use information about the movements of the aircraft VC of the Russian Federation in Syria. He stressed that Moscow shares with the coalition led by the United States information.

We informed our American partners about how, where, when, and at what echelons will be working with our pilots. The American party, which heads the coalition, which includes Turkey, knew about the place and time of stay of our aircraft, and it was there, and in that time we got hit

“The question is: why do we have this information passed to the Americans? Or they have no control over that make them allies, or rent this information right and left, not realizing what the consequences”, – concluded the President.

At the same time, according to him, Russia is ready to cooperate with the coalition, headed by USA.

But of course, incidents like the destruction of our plane and the death of our soldiers, airman, and marine who went to the rescue of his comrades, is absolutely unacceptable. And we believe that this will not be repeated

The Russian leader regretted that the Turkish authorities “recklessly and foolishly” destroyed an unprecedented level of cooperation with Moscow, made in the past ten years. “He really was a very high level – we believed Turkey is not just a neighbour, as a friendly state, almost an ally,” the President said.

In addition, Putin expressed regret in connection with the reaction of Ankara to the incident with the Russian plane.

“Well, it’s not our choice, is the choice of the Turkish side”, – concluded the head of state.

Putin admits that the top political leadership of Turkey is not aware of illegal oil supply from terrorists from Syria. 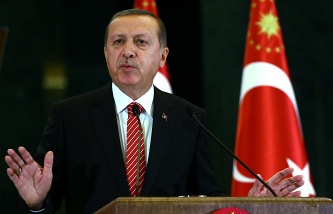 Erdogan: Turkey is not buying oil and gas from the IG

However, the Russian leader admitted that “believe in it with difficulty.”

The President recalled that two weeks ago at the G20 summit in Antalya “showed pictures taken from the height of 5 thousand meters of our pilots”.

Cars carrying oil arranged in sequence and go beyond the horizon.

“It looks like a living oil pipe,” he said.

The Russian leader reminded of the prohibition to buy oil from terrorists.

On this account a special resolution of the UN Security Council prohibiting directly to buy oil from terrorists, because in those barrels, which we carry, not just oil – the blood of our citizens, because the money terrorists are buying weapons, ammo, and then triple the bloody action with our aircraft over the Sinai, and in Paris and in other cities and countries around the world

The President admits that “there may be some elements of corruption, collusion – let them handle it”. According to him, “if the highest political leadership of Turkey knows nothing about it, then let him know”.

About the operation in Syria

Putin believes that Syria’s President Bashar al-Assad and his army are the natural participants in the fight against terrorism. He also noted that the Syrian army HQs and the Russian Federation have intensified strikes on the death of Russian su-24, and this is reasonable.

Yes, indeed, the armed forces and Syria, using systems of volley fire, which we delivered recently for the Syrian army, in coordination with the actions of our aircraft intensified attacks on this phase, just after we received credible information that one of the soldiers died and the second we were able to save. But how else?

According to the Russian leader, “it was supposed to be.”

They had fulfilled their duty to the Motherland, to Russia directly. We believe it is reasonable that there have strengthened our aviation and contributed to the strengthening of our troops

In this regard, the Russian leader noted that in the Kremlin to hear about the tribes that are close to Turkey.

With regard to the execution of the humanitarian convoy, according to Putin, humanitarian organization, which is referred to by the Turkish authorities, has already announced that its pillars, its representatives in this time and in this place was not.