“The reason for revocation was the possibility of seal failure tube transmission fluid of an automatic transmission due to vibrations”, – stated in the message. 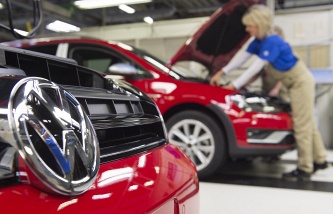 Volkswagen faces a fine of $18 billion

For defect elimination will be installed an additional lock tube to prevent vibration.

All work will be for car owners free of charge.

19 November it became known about the review in the Russian Federation 1 906 thousand cars Jetta, Golf and Beetle, implemented since 2013. The revocation reason – the probability of failure of a pulley of the mechanism of management of the valve timing (timing) of an internal combustion engine.

“As a consequence may be failure of a regulator of phases timing and damage to the belt drive on the engine,” says Rosstandart.

Under revocable campaign authorized dealers of LLC “Volkswagen group Rus” notify the owners of these cars through the distribution of informational emails and/or phone about the need to provide a car to the nearest dealership for repairs.

Under revocable campaign on the car replacement of a regulator of phases timing. All repairs are also free of charge.