MOSCOW, November 27. Negotiations of presidents of Russia and France Vladimir Putin and Francois Hollande in Moscow were a concrete step in the fight against terrorism. This was stated by Russian foreign Minister Sergei Lavrov. 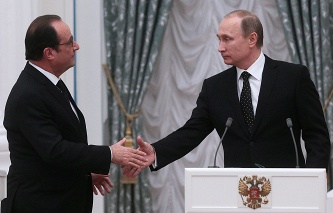 “No coalition, but more coordination”: the mass media about the visit of the French President in Moscow

“Hollande made a proposal to form a coalition are in line with Russia’s initiatives, he added. We have explicitly mentioned the Syrian government army, the Patriotic detachments of the armed opposition, the Kurdish militia appealed to all these groups coordinated their actions with States that help to eradicate (forbidden on the territory of the Russian Federation terrorist group) ISIS”.

“The Kurds and the Syrian armed opposition were originally introduced in the context of our initiative to create a front for fighting ISIS, said Lavrov. – So what Fabius said, is in line with our initiative, which is confirmed by the President Putin at the UN GA”.