MOSCOW, November 27. Deputy Chairman of the Federation Council Committee on constitutional legislation and state construction Elena Mizulina supported the proposal of the Chechen Parliament about a ban of mention in the media nationality or religious affiliation of those involved in terrorism. 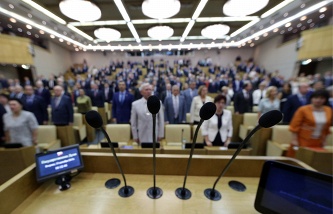 “I fully support this proposal. Nothing to do with extremism or terrorism, the true faith has no”, – quotes the Senator on its official website.

Mizulina noted that in recent years, the society is increasingly faced with attempts to give terrorism a religious colour. “We – the Russians – as no one else is able to appreciate the artificiality of this position. The centuries-old feature of Russia – a dialogue of religions, the confessional, the trust relationship of the various traditional faiths,” she said.

According to the Senator, it is necessary “to resist such provocations”. Besides, she is sure, in the public consciousness is embedded the myth that “Islamic state” (banned in Russia as a terrorist organization – ed.) “actually there is, its borders and territory”. “It’s not so”, – said the politician.

Earlier on Friday, the Parliament of the Chechen Republic has submitted to the state Duma a bill banning the mention in the media nationality or religious affiliation of those involved in terrorism. According to the parliamentarians, it is incorrect to call members of the banned in Russia the terrorist group “Islamic state” (IG) “representatives of the Islamic state” or “Islamic terrorists”.