SIMFEROPOL, November 27. /Corr. Alexey Konovalov/. The Prosecutor’s office of Crimea has made entrepreneurs more than 450 warnings about excessive pricing during the period of the Republic in emergency situations (ES) associated with the termination of the supply of electricity from Ukraine. The head of Department Natalia Polonskaya reported on the meeting of the operational headquarters. 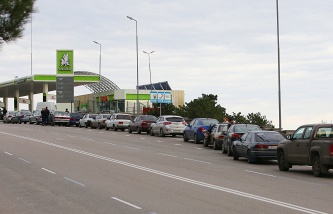 The Crimean authorities have begun combating speculators, the first pass were the sellers of gasoline

“Just today brought by prosecutors 463 warning about overcharging. All of them are made, prices are reduced, entrepreneurs all understand,” said Poklonski.

The head of the Crimea Sergey Aksenov advised the prosecutors to call the entrepreneurs personally to intimidation. “Paper accompany a phone call,” he said.

Previously Aksenov threatened with criminal cases anyone who speculates on the state of emergency. First of all, this applies to sellers of motor fuel.

In this case, the residents tell us that one of the most moving products of recent times – the candles – the price to 100 rubles. “The popularity of mad at us. So I just laid and the hour is already 40 units sold. Of course, try not to raise the price, bought the candle for 45 rubles and sell at 50. But someone and 80-100 rubles apiece selling candle. Demand creates supply,” said Alexander, who organized the candle shop just at the entrance of a large supermarket in the centre of Simferopol. In Sevastopol the candles a few times went up to 60 roubles – in 10 times, reports correspondent..