SEVASTOPOL, November 28. /Corr. Janina Vaskovsky/. Ferry “Varyag” will be released on Monday, November 30, from Sevastopol port in Zonguldak (Turkey) to pick up stranded there Crimean truckers. This was reported by press Secretary of the Governor of Sevastopol Sergey meniailo Kirill Moskalenko. 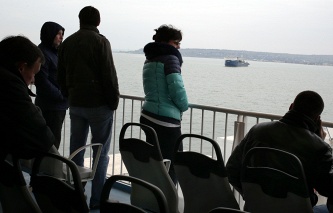 “Upon learning of the situation, Sergey Menyailo instructed the port authority to negotiate with the agent, providing the ferry. As a result, it was decided that on Monday, the “Varyag” will be released in Turkey. This will be the last flight to Turkey”, – said Moskalenko.

In Turkey the Crimean stuck 30 trucks with drivers.

Previously reported Kryminform with reference to the owner of the truck Ivan Kuzimu that truckers from the Crimea cannot leave Turkey due to the cancellation of ferry service between Zonguldak and Sebastopol and an unofficial ban on the skip of the Russian freight transport across the border.

“In Turkey at the port of Zonguldak are Crimean cars with drivers, and can’t go home. One ferry went to the Crimea, and he stopped. As now get, them no one can tell, – said the carrier. – In Turkey, about 30 Crimean machines, we keep in touch. Turkish ferries refused to carry the machine with Russian numbers”.