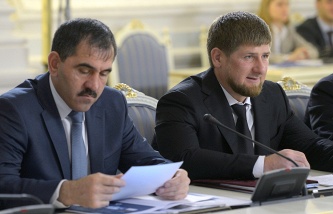 “They’re trying to blame me that I am against Islam and support the infidels. I like specificity, so I have to ask, when, where, and how Turkey helped Chechnya and to my people? Show me at least one school, a hospital, a kindergarten, a mosque built as a gift to Chechnya! Name one example! Yes, you helped the Wahhabis, terrorists, collecting money for them. Treated, took on vacation Dugovich, Umarovich, Basayev. They and their accomplices had carried out the attacks that destroyed the Chechen people. Is your help?”, – wrote Kadyrov on his page in the social network.

The head of the region reminded that in the nineteenth century Turkey tricked tens of thousands of Chechens who were created brutal conditions. In 5 years, more than half of them died, and attempts to return home “were stopped by fire.”

Kadyrov: in Moscow detained about 20 Chechens going to fight in the ranks of the IG

Kadyrov is ready to withdraw the application from the Sakhalin court on the Quran, if the judge will apologize

“Today, Turkey has become a base for recruiting and sending terrorists to Syria. Through Turkey there are bandits from around the world. Detained only one. Turkey is not fighting ISIS (banned in Russia terrorist group “Islamic state”)! She started the business, buys the oil, financed the enemies of Islam, killing thousands of Muslims. And more! Who shamefully supported in Paris with the authors of the cartoons of the Prophet? I harshly condemned the cursed journal, gathered in Grozny more than one million people in the whole world has expressed its strong protest,” – said Kadyrov.

The head of Chechnya said that if “even the Earth will burn in flames”, he will not do a single step against Islam, he is an enemy of the Wahhabis and vowed to fight them all your life.

“Russia has almost 30 million Muslims. This is our Fatherland! And a plane downed Turkey out! And our pilot! And did you know that Russia has millions of Muslims, why you shot down on the orders of USA and West our plane, killed our pilot, is at war with ISIL, protecting the Muslims? With your consent and connivance of the West destroyed Iraq, Syria, Libya. Now tell me, what are your reasons to accuse me of that against Islam? I am a defender of Islam! And Turkish authorities to help destroy the Islamic peoples and countries,” – said Kadyrov.