MOSCOW, November 28. After two weeks of work the state system for collection of tolls truck weighing over 12 tons “Plato” in the Federal road Fund collected 550 million. About it reports a press-service of the Federal road Agency. 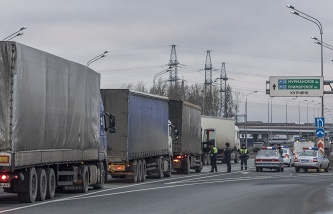 The Minister of transport will hold a meeting with protesting truckers in St. Petersburg

“The funds raised on November 27, 2015 – 550 million roubles. All funds raised go to the road Fund directly. The state is not spent on the construction of a single ruble”, – stated in a press release.

In addition, it is reported that the transport Minister Maxim Sokolov meets with carriers in St. Petersburg to discuss current issues in the interaction, and to hear their suggestions on improving the ease of use of the system.

“During this meeting, the Minister, in particular, invited the representatives of the carriers to join in the work of the Supervisory Council under the Federal road Agency, in order to participate in the selection of highway infrastructure projects, which will be aimed raised “Plato” means”, – reads the communication.

System “Plato” started to levy charges on account of compensation of harm, caused to the automobile roads of Federal value by vehicles, having the resolved maximum weight over 12 tons. In the toll collection system registered more than 600 thousand vehicles and more than 110 thousand of their owners, which is 60% of the total Park. Large companies with a fleet of 50 vehicles or more registered 90%.