MOSCOW, November 28. Information about the projects of the road infrastructure, which went from a money system of charging heavy vehicles “Plato,” will be available in a special section of the website. About it on air of TV channel “Russia 24” said the head of Ministry of transport Maxim Sokolov after the meeting with carriers in St. Petersburg. 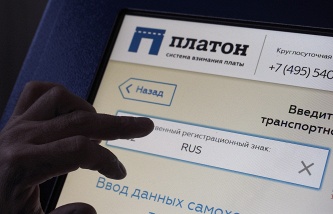 The Minister of transport will hold a meeting with protesting truckers in St. Petersburg

“To ensure transparency follow-up costs – we including told. Will be created a special section on the website (platon.ru), where there will be information on what the funds collected through a system of “Plato” are used for which specific projects”. – he reported.

According to the Minister, cancellation of the system is impossible at the moment. “A required compromise the government of the Russian Federation, state Duma deputies have made: we have reduced taxes,” – said Sokolov.

The head of the Ministry of transport during the meeting with carriers in St. Petersburg invited them to participate in the selection of highway infrastructure projects, which will be sent collected by the system “Platon” money. “The Minister, in particular, invited the representatives of the carriers to join in the work of the Supervisory Council under the Federal road Agency”, – reports a press-service of the Federal road Agency.

System “Platon” running from November 15 to charge on account of compensation of harm caused by road vehicles, having the resolved maximum weight over 12 tonnes, According to the results of two weeks of work of the state system to the Federal road Fund collected 550 million rbl. it is Planned that in 2016 the collection of payments will bring 40 billion rubles to the Federal road Fund. The money will be spent on the repair of Federal highways.

To date, the toll collection system registered more than 600 thousand vehicles, which is 60% of the total Park. Large companies with a fleet of 50 vehicles or more registered 90%.